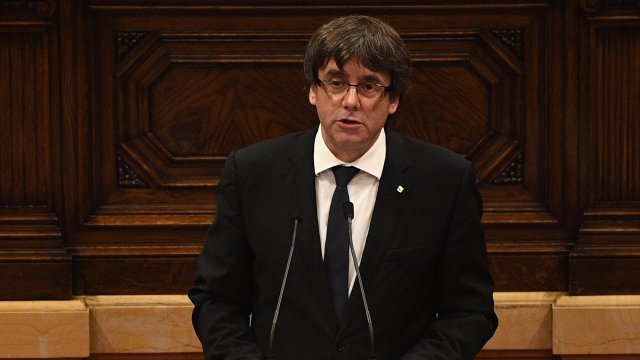 In a speech to the Catalan Parliament, Carles Puigdemont said he will follow the will of those who voted in the Oct. 1 referendum.

Catalonia's president said the region won the right to independence from Spain.

In a speech to the Catalan Parliament, Carles Puigdemont said he will follow the will of those who voted in the Oct. 1 referendum. But he's delaying any formal changes until his government can discuss the issue with the Spanish government.

Puigdemont's declaration comes after the Catalan government held a referendum Oct. 1 where 90 percent of voters were in favor of separating from Spain. Voter turnout was almost 43 percent.

But the Spanish government argues the referendum itself was illegal. Spanish police and security forces tried to prevent Catalans from voting, causing violent clashes.

Since then, Spanish officials have refused to negotiate, despite thousands of people across Spain urging both sides to engage in dialouge.

Puigdemont said, "If everyone acts responsibly, the conflict can be resolved in a calm and agreed manner." But it's unclear how long Catalan leaders will wait to start a dialogue with Spain.

Correction: A previous version of this story was unclear about which countries border Catalonia.