The Weinstein Co. Is Trying To Distance Itself From Harvey 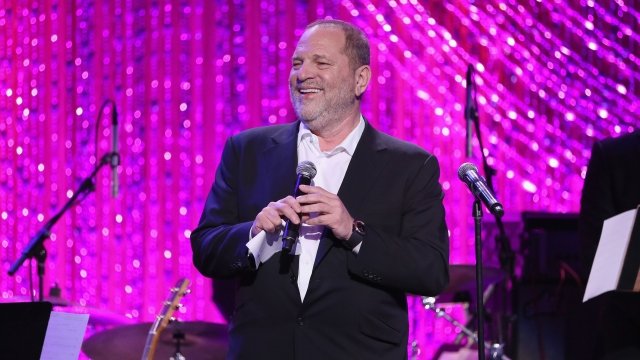 The production and distribution company is reportedly working to change its name after its board fired co-founder Harvey Weinstein.

Since Harvey Weinstein was booted from the business he co-founded, The Weinstein Co. is trying to distance itself from the scandal-ridden producer.

First up: a reported name change. Some say this will happen "quickly," while others report it might be a while before the company dons a new moniker.

The Weinstein Co. is also reportedly removing Harvey Weinstein's name as an executive producer on its TV shows. This could happen as soon as Oct. 12 with an episode of "Project Runway" and continue for upcoming seasons of MTV's "Scream" and the History drama series "Six."

Harvey Weinstein's name is also being removed from series The Weinstein Co. still has in the works, including "Waco" and "Yellowstone" on Paramount TV as well as a currently untitled drama starring Julianne Moore and Robert De Niro for Amazon.

Harvey Weinstein's name is also expected to be scrubbed from the company's upcoming films — this was reportedly already done for "The Current War," out in November.

These moves might be enough to save some projects. Showtime confirmed to Variety it's still working with The Weinstein Co. on a project about the Guantanamo Bay military prison.

But it's not enough for Apple. The tech giant scrapped plans for a Weinstein Co.-produced biopic on Elvis Presley.

The project was reportedly still in its "very early stages," and Weinstein Television already brokered a deal with Presley's estate for rights to the singer's music.

Deadline reports The Weinstein Co. is now trying to shop the Elvis project to another network.