Biden Administration Could Make Changes At Dept. Of Education Quickly 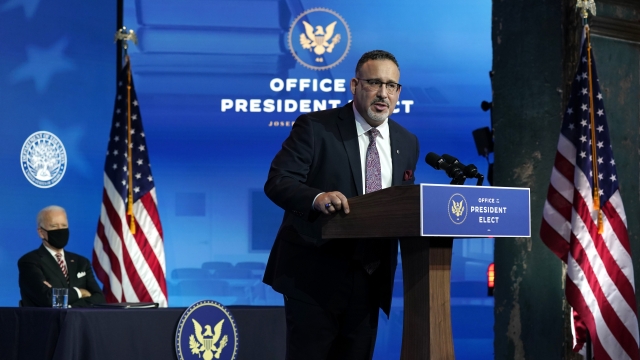 Joe Biden has made his goal for education clear —

"We will also do everything we can to keep our educators and students safe and to safely open a majority of our K-8 schools by the end of our first 100 days."

But the new president is expected to use the power of the pen to roll back some policies from the previous administration.

Former Education Secretary Betsy DeVos was responsible for overseeing some controversial changes in federal schooling policy. She changed guidelines from the Obama administration that aimed to reduce discipline disparities in schools and she withdrew guidance that allowed transgender students to use bathrooms that align with their gender identity.

Michael Hansen, the director of the Brown Center on Education Policy at the Brookings Institution, says those are two things the Biden administration can easily change.

"The recent Bostock vs. Clayton County Supreme Court decision, it actually bolsters a reversal to going back to what the Obama-era guidance on transgender bathrooms was, and so that's likely a decision that's going to happen pretty quickly," said Hansen.

But not every change is easy to roll back. Under DeVos, the Department of Education finalized new regulations on college campus sexual misconduct cases that critics say gave more rights to the accused.

"She did undergo a full rulemaking process as is required to establish these new rules. And I don't see those Title IX rules being reversed very easily, anytime soon," said Hansen.

But like the rest of Biden’s agenda, the top education priority is dictated by the ongoing pandemic.

"COVID and reopening has to be the biggest priority. I think any second priority is far down the list after every other nuance around reopening schools and doing that safely," said Hansen.