The Changing Tide For Unionizing In The U.S. 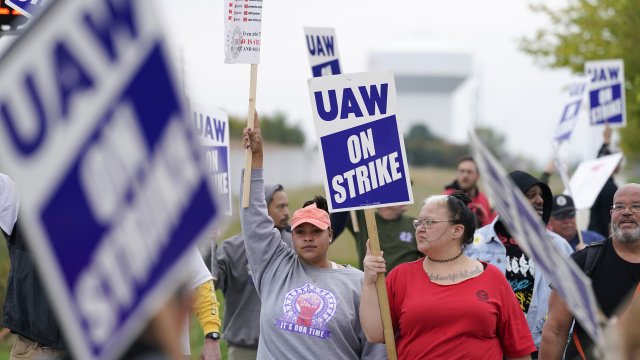 Unionizing has been making an unusual comeback in the U.S. as the economy roars back from pandemic lows, but efforts don't always mean success.

There's a surge of high-profile unionizing and union activity going on in the U.S. workforce, from media to food and retail industries.

A labor union is an organized group of workers who make decisions about working conditions like retirement plans, insurance and wages. They bargain with the employer on behalf of its employees.

A recent Gallup poll found that 71% of Americans approve of labor unions. That's the highest percentage recorded since 1965, and according to data from last year, there was near unanimous approval among Democrat respondents, reaching a record high of 90%.

So, what's behind all this unusual, sudden union activity, and is this really a sign of lasting change?

"Our social welfare system is employer provided, and what I mean by that is we get our health care, we get our private pensions, etc., through our employers," said Lane Windham, associate director of the Kalmanovitz Initiative for Labor and the Working Poor at Georgetown University. "In other countries, a lot of that comes through government, through the state, and that sets up a system in the United States that gives corporations a heavy incentive to stop workers from forming unions."

Why Are Layoffs On The Rise?

Companies are beginning to lay off employees, and are in a hiring freeze amid inflation and an upcoming recession.

Union membership rates have actually been on a steady decline since the 1960s. At their height, nearly a third of Americans were in a union. By 2021, that's down to about 10%. That drop is particularly stark for the private sector. While about a third of public sectors jobs have consistently belonged to unions, private sector jobs have declined, down to about 6% last year.

There are a few reasons for why this could be. Some industries where unions dominated in the 1950s, like manufacturing, declined over the next few decades. But also over time, employers gained newfound empowerment in disrupting any organizing. Much of that has to do with the changing political winds in the 70s and 80s.

"In the 1970s, employers begin to have to make a profit within a globalized capitalism," Windham said. "They are now competing with corporations all over the globe, and so where are they going to be able to make a profit margin?"

"What you see in the 1970s is that corporations began to bend and break labor law at a whole new level," Windham said. "The number of unfair labor practice charges against employers in the 1970s doubles, and you also see the rise in this time of the anti-union consultant industry."

In 1981, things came to ahead with a strike of federally employed air traffic controllers. There, former President Ronald Reagan threatened to fire the workers and ban them from the industry unless they return to work within 48 hours, saying, "But we cannot compare labor management relations in the private sector with government. Government cannot close down the assembly line."

To be clear, a strike is technically illegal for air traffic controllers in the U.S. without going through the proper steps, and the process to authorize a strike is purposefully complicated to keep airlines from shutting down. But, it wasn't until this moment that those rules were enforced on such a massive scale. Reagan ended up firing and banning more than 11,000 workers who refused to cross picket lines.

"The fact that Ronald Reagan fired the air traffic controllers sent a message that workers both in the public and private sector did not really have a full freedom to form unions," Windham said. "It chilled any radicalism. It chilled any effort to effectively build their movement."

In the following years, the average number of major strikes per year plummeted.

Employers became emboldened to replace striking workers, so the downward trend of union membership continued to the record-lows now showing up in the past couple of years.

So, what turned the tide in recent years?

"Think about the early days of the pandemic," Windham said. "Remember we celebrated essential workers, we banged pots and pans for them, we waved at the delivery truck drivers. Then, we watched as all those essential workers went back to the same kind of dead-end jobs, and people really saw how unjust our system is."

Going into 2021, companies started recording record profits as the economy came roaring back from pandemic lows, growing to the fastest full-year rise since 1984. There was also a historic job shortage, as employers struggled to recruit and retain workers. This combination of things made a perfect storm for unionization efforts: For workers, suddenly, the bargaining ball was in their court.

That's especially true for industries dependent on so-called "essential workers," like retail or food and restaurants.

Though there is a visible jump in the number of workplaces starting to organize — that number doubled from 2020 to 2021 — that doesn't necessarily translate to unionization successes.

Earlier this year, two Apple stores filed paperwork to begin organizing. The momentum fizzled out, however, after Apple hired anti-union lawyers, sent out warnings against unionizing and eventually gave a pay raise to retail workers.

Four Amazon warehouses have recently held elections to form a union, but all but one have decisively voted against it. Those losses include a second warehouse on Staten Island in New York.

Starbucks is embroiled in a number of legal battles after allegedly firing workers for organizing unions and being accused of shutting down stores that successfully voted to unionize.

In the U.S., it's a long, long road from generating momentum for union efforts to actually winning that victory.