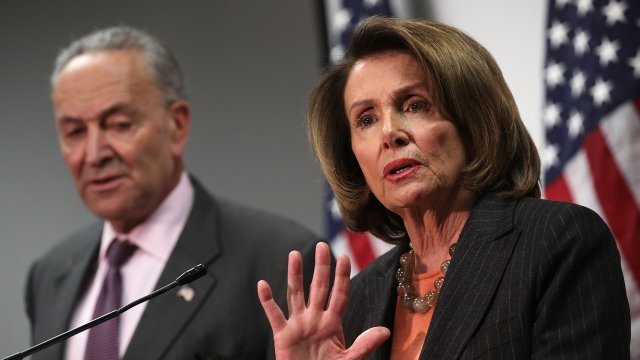 Democratic leaders backed out of a planned White House meeting over one of the president's tweets.

Tuesday morning, the president tweeted about an upcoming bipartisan meeting. About two hours later, Democratic leaders said that meeting wasn't worth it.

But Trump went on to criticize them on immigration, crime and taxes, tweeting, "I don't see a deal!"

The White House didn't release an agenda for the meeting, but the upcoming budget deadline probably would've been up for discussion.

Pelosi and Schumer responded with a joint statement bowing out of the meeting. They said, "We believe the best path forward is to continue negotiating with our Republican counterparts in Congress instead."

The two Dems added that a White House visit would just amount to a "show meeting" and instead invited their Republican counterparts, Senate Majority Leader Mitch McConnell and House Speaker Paul Ryan, to discuss the year-end agenda Tuesday afternoon.

The White House put out a statement on the canceled meeting, calling Schumer and Pelosi's decision "disappointing." Press secretary Sarah Huckabee Sanders said, "The President's invitation to the Democrat leaders still stands, and he encourages them to put aside their pettiness, stop the political grandstanding, show up and get to work."