How Cities Will Stay Dry In A Rain-Soaked Future 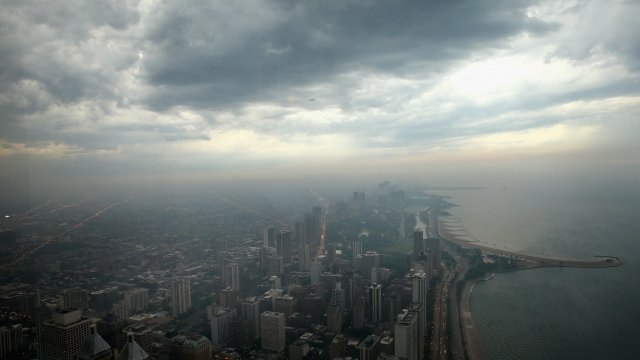 As the planet warms up, more rain will fall. So where do you put all that water?

When heavy rain falls on a city's pavement and infrastructure, it makes certain problems worse, like overflowing sewers and severe flooding. Even the heat released from urban centers can make storms stronger. So some cities are turning to ambitious new tools to manage the water.

In 2006, Tokyo finished the one of the largest underground storm drains on Earth in anticipation of record-setting future rainfall. The $2 billion caverns are already paying off, as the region sees heavy rain more often.

As of 2015, the Thornton Quarry, located just south of Chicago, was the world's largest stormwater reservoir. It's a key part of a $3 billion wastewater project that's been running for more than 30 years, keeping storm runoff from overflowing the sewer system and protecting the city and its waterways.

And communities in Sweden have planted rain protection right into their buildings. Instead of hard shingles, some roofs in the city of Malmö are covered with plants. They create shade, which reduces the heat a city feeds back into a storm, and they also absorb more than half of rainfall before it hits the ground.

Massive projects like these could be here just in time. As the climate warms, scientists expect more rain will fall worldwide — and as urban areas grow larger, dealing with all the water will be more important than ever.