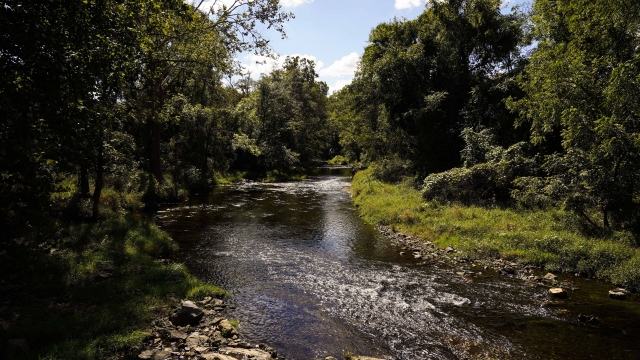 A certain mystique laps upon the shores. Even in the dead of winter on the Chesapeake Bay, there are still plenty of signs of life.

"This time of year, I notice how clear the water is," said Beth McGee, who has spent decades studying the nation's largest estuary.

On the surface, things may look calm here. However, this watershed, which touches six states and spans over 64,000 square miles, is sick.

"All told, the bay is still struggling," said McGee, who works for the Chesapeake Bay Foundation.

Every year, the nonprofit gives this waterway a grade based on how healthy it is. This year, it received a D+.

Why is our water quality in question?

What’s happening here has become a case study on just how hard it is to clean up and restore vital watersheds and estuaries, as well as reverse the impacts of pollution and global warming even as costly plans are being put in place nationwide to push back against climate change.

Environmentalists first started realizing how polluted the Chesapeake was back in the 1970s. By 2010, government agencies, nonprofits and environmentalists started taking action to clean it up.

"People across the country were saying, 'We need to watch this,' because they are setting themselves up for success. They have plans. They have accountability that no other watershed has had," McGee added.

Thirteen years later, though, progress has been slow.

Across the lower 48 states, there are 78 major watersheds, essentially basins catching water from rivers as they hit the sea. But of the more than 700,000 miles of waterways in the U.S., nearly 51% are impaired by pollution.

"One hundred years ago, people didn’t give rivers and streams much thought," explained Matt Ehrhart with the Stroud Water Research Center. "Clean, fresh water is one of the most vital resources we have."

Ehrhart says that these days, most pollutants in our nation's watersheds come from agriculture. Fertilizers and pesticides used on crops often run off into nearby rivers and streams. There are other causes, like runoff from the road salt we use in the winter.

"It’s critical the way we live on the landscape doesn’t unduly impact those resources," he added.

Flint: The poisoning of an American city

When Flint, Michigan, changed its municipal water supply source in 2014, distribution pipes corroded and lead leached out into the drinking water.

The Red Hill fueling station at Pearl Harbor is leaking chemicals into the O'ahu water supply, causing damage that could last generations.