Climate Change Is Changing How We Deal With Wildfires 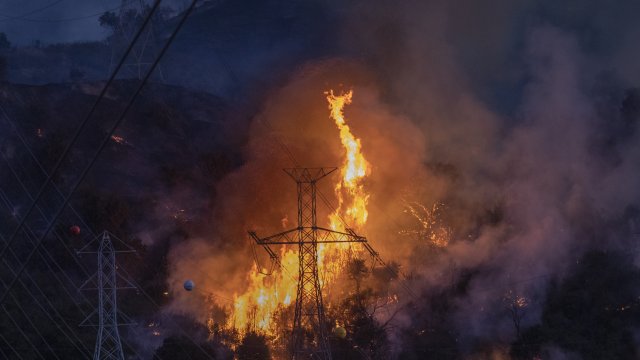 As the climate changes, it can be more conducive to wildfire. We have to change our responses, too.

Climate change is changing the nature of wildfires and changing how we live with them. These days, fire season in the western U.S. lasts longer and fires burn more area than they used to. And they're triggering more voluntary blackouts.

Faith Kearns coordinates research and outreach at the California Institute for Water Resources. She says California's usual dry season and intense winds can make wildfires a perennial problem for residents.

But one thing she says is less normal is that blazes kick off later in the year than they used to. She points to the Thomas Fire: It started in December 2017, "which might have previously been thought as firmly too far into the rainy season for such a large fire."

Experts are confident that human-driven climate change is making the air warmer than it used to be and making the ground drier. These are two variables that are thought to support more erratic, faster-growing fires.

We're also building more than ever on land which increases wildfire risks. By one recent study, the wildland-urban interface — where development meets wild areas that are thick with fuel — is the fastest-growing segment of land use in the U.S.

The More We Expand Into Wild Spaces, The Worse Wildfires Can Get

As development increases in the countryside, so do the risks from wildfires and the resources it takes to stop them.

These changes in the fire environment are changing how we deal with fires on the ground. Evacuations can take longer. Fire agencies often need more firefighters. Researchers who measured the Camp Fire in 2018 told Newsy they'd never seen worse air quality levels.

And utilities are switching off the power for more people than ever in a bid to keep power equipment from sparking new fires. This has broad impacts and hasn't always been a consideration for fire experts, but Kearns tells Newsy that's changing. She says, "Although I have not been contemplating a future filled with power shut-offs, there are researchers saying that at least in the short-term, this is likely to be part of the equation."