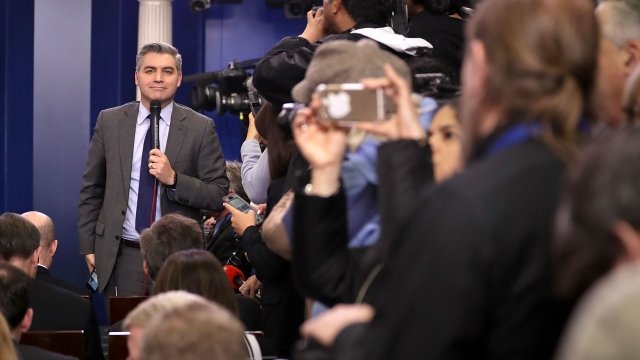 CNN disputes the Trump administration's characterization of an interaction between Acosta and a White House intern.

CNN is suing President Donald Trump and others so its chief White House correspondent can regain access to the president.

The lawsuit, filed Tuesday morning, is in response to the White House revoking Jim Acosta's press pass earlier this month.

In its complaint, CNN says previous court rulings protect access to the White House under the first amendment, and that access can't be denied without "compelling reasons." It also notes that any journalist must be given the opportunity to rebut any accusations against him or her, citing the due process protections of the fifth amendment.

The White House says it revoked Acosta's press pass because he "[placed] his hands on a ... White House intern." But CNN disputes that characterization and says, "Acosta was only attempting to hold onto the microphone as the staffer tried to grab it from him."

CNN is asking the court to immediately restore Acosta's credentials and declare the Trump administration violated the constitution. The network said, "If left unchallenged, the actions of the White House would create a dangerous chilling effect for any journalist who covers our elected officials."

In response to the lawsuit, press secretary Sarah Sanders said Acosta was trying to "monopolize the floor" and he "refused to yield to other reporters." She said the White House will vigorously defend itself.