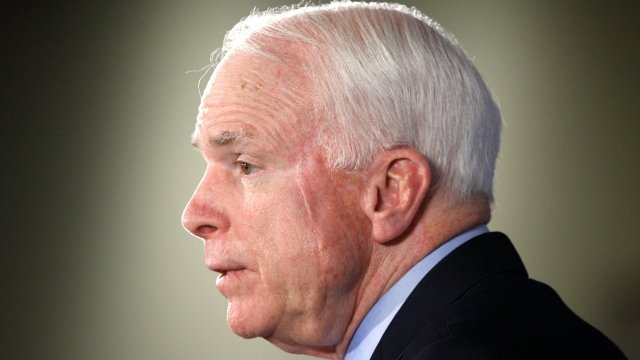 Sen. John McCain doesn't know when he'll be able to return to the Senate and is weighing options for further treatment.

Politicians across the board are voicing their support for Sen. John McCain, R-Ariz.

McCain announced Thursday he has been diagnosed with brain cancer. Doctors discovered a tumor after removing a blood clot above his eye.

Former President Barack Obama tweeted his support. He said McCain is "an American hero & one of the bravest fighters I've ever known." He told the veteran senator to "give it hell."

Sen. Elizabeth Warren, D-Mass., said "trust me, John's in fighting shape," recalling a trip she took with McCain to Pakistan and Afghanistan in early July.

McCain Calls Putin A Bigger Threat To The World Than ISIS

Former Secretary of State Hillary Clinton also lent her support, saying in part that "John McCain is as tough as they come."

And President Donald Trump released a statement sending his thoughts and prayers, telling the senator to "get well soon."

McCain doesn't know when he'll return to the Senate and is weighing options for further treatment.