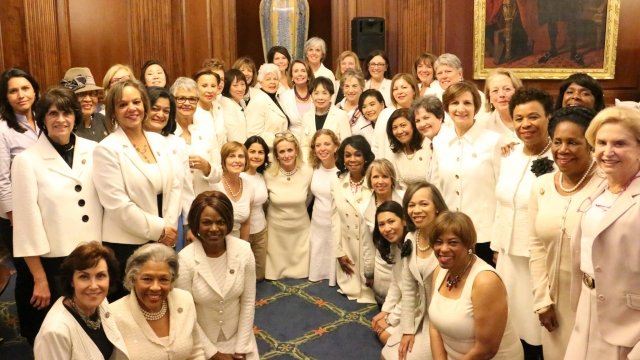 It read, in part: "The American people deserve a full inquiry into the truth of these allegations. ... We cannot ignore the multitude of women who have come forward with accusations."

Trump has been accused of sexually harassing and assaulting more than a dozen women.

On Monday, four of those accusers asked Congress to investigate the president. But it's unclear exactly which government agency would head that effort.

The U.S. ambassador to the United Nations said, "Women who accuse anyone should be heard."

Trump responded to the women's group's letter Tuesday. He tweeted: "The Democrats have been unable to show any collusion with Russia — so now they are moving on to the false accusations and fabricated stories of women who I don't know and/or have never met."

The lawmakers asked the House oversight committee to respond to their request within 10 days.