Democrats Want Trump's Helsinki Interpreter To Testify. Can She? 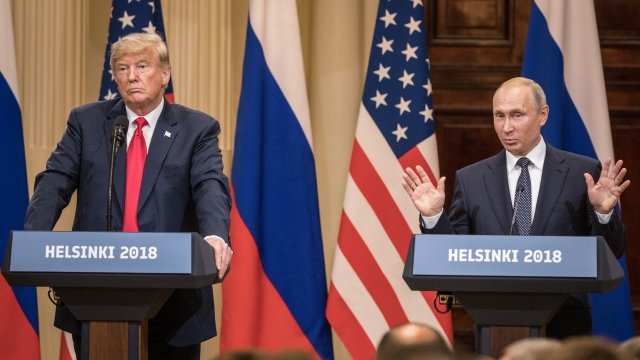 Democrats want to subpoena the State Department interpreter who was in the room during the meeting between President Trump and Vladimir Putin.

There was one other American official present when President Donald Trump and Russian President Vladimir Putin met in Helsinki on Monday.

And now congressional Democrats want to subpoena her to testify on Capitol Hill.

"I think the American public, our leaders in Congress, the world deserves to know what transpired in those meetings, in that meeting, and I don’t think we’re going to get a straight answer out of President Trump, and the only other person that we can talk to that is essentially an agent of the United States is that translator," Rep. Joe Kennedy III said in an interview with Newsy's Bianca Facchinei.

Despite numerous warning from members of Congress, Trump attended the two-hour meeting with Putin alone, save for U.S. State Department interpreter Marina Gross.

During a press conference after the meeting, Trump said he believed Putin when he said Russia did not meddle in the 2016 U.S. elections, despite agreement from 17 U.S. intelligence agencies that Russia did.

Trump later walked back that remark, but lawmakers say they're more worried about what Trump and Putin might have discussed behind closed doors.

"The reality of this is that if the Russians were taping that conversations, if there were any promises that were made, they're going to have the leverage over how to use that information, when to use it, how to leak it, any opportunities to perhaps misrepresent that information to the detriment of President Trump and the United State of America, they will do," Kennedy said.

It’s unclear whether or not Gross would be able to legally reveal any of the details of the conversation between Trump and Putin. After all, this isn't something that happens very often.

White House Seeks To Clarify Trump's 'No' On Russia Question

This comes after Trump clarified a statement he made at a joint press conference with Vladimir Putin.

According to the code of ethics published by the American Translators Association, interpreters must "hold in confidence" any privileged or confidential information they receive during the course of their work.

In a statement, Judy Jenner, a spokeswoman for the American Translators Association, said, "We have codes of ethics for many fields of interpreting ... but I do not see how those codes of ethics would supersede a congressional subpoena."

In a letter to the leaders of the House Oversight and Government Reform Committee, Democratic Congressman Bill Pascrell wrote, "It may be unprecedented to subpoena a translator to reveal the details of a private meeting between the President and another world leader, but Trump's actions are unprecedented in a way that harms our national security."

Although several Democrats have called for Gross to testify before multiple committees, only the Republican chairs of those committees can determine who is called to testify.

Sen. Bob Corker, the Chairman of the Senate Foreign Relations Committee, says he is looking into whether or not Gross can be brought in to testify, according to CNN.

Corker told reporters Wednesday that he would prefer to question Secretary of State Mike Pompeo, who is set to testify before lawmakers next week.