Niger Ambush: Here's What We Know So Far 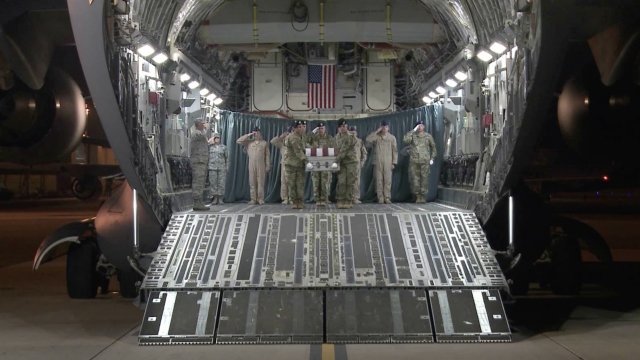 The Defense Department, U.S. Africa Command, the French military and the FBI are all looking into the attack.

More than two weeks ago, an ambush in Niger killed four U.S. troops and left two wounded. Details about the incident are just beginning to trickle in.

So far, media outlets have consistently reported these details: On the day of the ambush, 12 U.S. troops were traveling in unarmored pickup trucks with limited weaponry. Sometime after meeting with local community leaders, the troops were ambushed by at least 50 ISIS-affiliated fighters. The New York Times reported on Friday that number was closer to 100, and affiliation to the Islamic State has not yet been confirmed.

Former Gen. John Kelly said Trump "expressed his condolences in the best way he could" after four U.S. soldiers died in Niger.

On Friday, officials told CNN that Johnson was found nearly a mile away from the scene of the ambush.

The Defense Department, U.S. Africa Command (or AFRICOM), the French military and the FBI are all looking into the attack. Experts working for AFRICOM are reportedly establishing an hour-by-hour timeline of the events. Military officials told the Times the Pentagon is trying to determine whether some U.S. forces diverted from their routine patrol and directly acted against "Islamic insurgents" before the ambush.

The Pentagon has reportedly not been forthcoming with details surrounding the investigation, and the Times says it's because of contradictions between American and Nigerien accounts.

Many have voiced frustration about the lack of information provided. On Thursday, Sen. John McCain said a subpoena may be needed to get more answers.