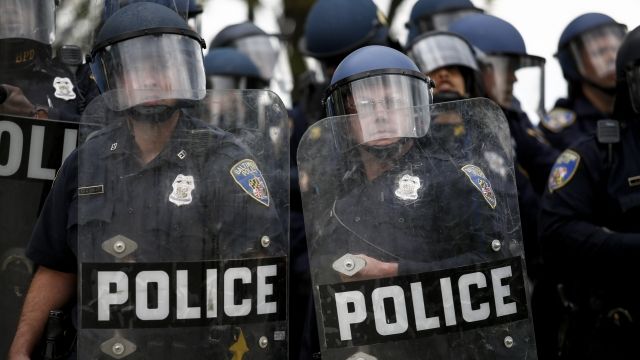 The Department of Justice is asking a federal judge for more time to look over a suggested plan that would overhaul Baltimore's police department.

The U.S Department of Justice is asking a federal judge for more time to look over a plan that would overhaul Baltimore's troubled police department.

On Monday, the DOJ filed a motion requesting a 90-day delay to "review and assess" its proposed police reform consent decree with Baltimore.

The government said it needs more time to see if the proposed changes would clash with new Attorney General Jeff Sessions' crime-fighting agenda.

But critics say the delay could mean Trump administration won't back the consent decree.

The Baltimore Police Department arrested seven of its own after they were indicted on federal racketeering and conspiracy charges.

After all, it was signed during the final days of Barack Obama's presidency.

The decree was originally proposed in response to a federal investigation that found a pattern of civil rights violations within Baltimore's police department. Those violations included racial profiling and excessive force.

The probe was launched after Freddie Gray, a 25-year-old black man, died after suffering injuries in police custody in 2015.

The DOJ's motion came three days before a scheduled hearing in front of a federal judge. And it was filed just hours after Sessions said he told Justice Department officials to review reform agreements with embattled police forces across the country.