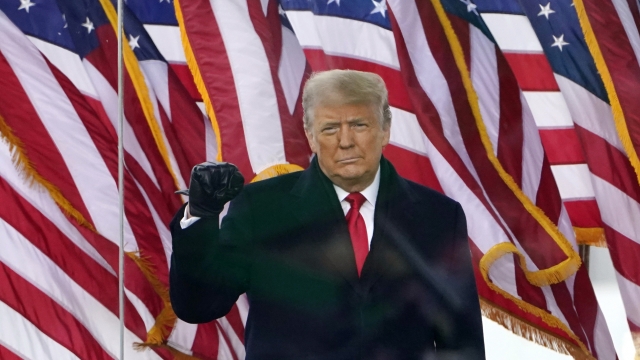 Former President Donald Trump will be allowed back on Facebook and Instagram more than two years after he was banned.

Trump was removed from the platforms following the attacks on the U.S. Capitol on Jan. 6, 2021. Facebook said it took action because they believe Trump was "praising" those who engaged in violence at the Capitol.

Nick Clegg, Meta's president of Global Affairs, said in a blog post that Trump's accounts will be reinstated in the coming weeks. He noted that the company will implement new "guardrails" to "deter repeat offenses."

"In the event that Mr. Trump posts further violating content, the content will be removed and he will be suspended for between one month and two years, depending on the severity of the violation," Clegg wrote.

Facebook's new protocol addresses content that promotes violence like that experienced on Jan. 6, 2021, delegitimizes an upcoming election or is related to QAnon.

Clegg said Trump could have posts removed for posting that type of content, the share button could be restricted and advertising tools may be off-limits to him.

The decision to reinstate Trump's accounts will likely be criticized. Clegg said he understands that people will disagree over whether the company made the correct decision.

"A decision had to be made, so we have tried to make it as best we can in a way that is consistent with our values and the process we established in response to the Oversight Board's guidance," Clegg stated.

Trump announced he is running for president in 2024. Facebook says it believes the public should be allowed to hear from politicians so they can make informed choices.

Social media is important for politicians, but how well does it work?