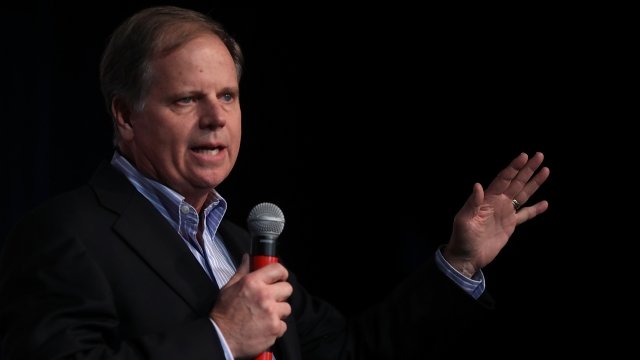 You probably couldn't be faulted for not knowing the name, background or positions of the man running in the Alabama special election not named Roy Moore. Doug Jones, career prosecutor and moderate Democrat, entered the race as a long shot — but as election day has gotten closer, so have the polls. But who is he?

Jones was born in 1954, back when the South was still very much segregated. He became enthralled with politics, law and civil rights early in his life — at one point, heading to Washington, D.C., to work for the moderate Democrat Sen. Howell Heflin.

Because his family was young, Jones went into law instead of politics. He worked as an assistant U.S. attorney and then in private practice until 1997. That's when President Bill Clinton came knocking, appointing him to be the U.S. attorney for the northern district of Alabama.

In the early 2000s, Jones sought and won convictions against two members of the KKK for their involvement in the 16th Street Baptist Church bombing that killed four black girls in 1963. Jones says the case was what originally got him interested in politics as a young man.

Coverage of the race has largely centered around two big issues: abortion and allegations of sexual misconduct in Moore's past. But where does Jones stand on some of the other hot-button issues?

For the most part, he's your typical Democrat: He's pro-abortion rights, pro-Obamacare and pro-LGBTQ rights. But some of his views are either just in the middle or to the right of center.

Jones made a name for himself after convicting two Klu Klux Klan members for their involvement in a 1963 church bombing.

Jones supports free trade, something that used to be popular with Republicans. He also supports stronger security along the southern border and has described himself a "Second Amendment guy" — but has also called for expanded background checks.

During the Senate election, Jones has done all he can to make sure he gets the votes of the Democratic base, while also trying to peel off votes from moderate Republicans, especially as some of them have soured on Roy Moore.