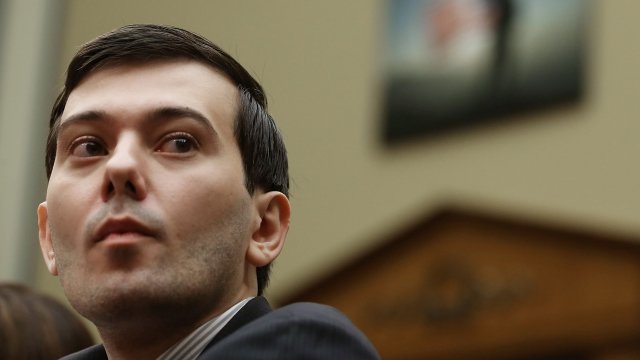 Shkreli allegedly wrote in a letter to his employee's wife, "I hope to see you and your four children homeless."

Federal prosecutors say Martin Shkreli threatened the wife of a then-employee in a letter.

The letter read, in part, "I hope to see you and your four children homeless. I will do whatever I can to assure this."

On Tuesday, during Shkreli's securities fraud trial, Timothy Pierotti testified that Shkreli threatened his family in a fight over stocks.

Pierotti said the problem stems back to 2012, when, he says, Shkreli convinced him to buy stock in a shell company that would merge with Shkreli's drug company, Retrophin.

Pierotti testified that not long after buying the stocks, Shkreli started pressuring him to sell them back to him. Pierotti said Shkreli got angry when he refused.

'Pharma Bro' Got His Twitter Suspended For Alleged Harassment

Shkreli allegedly sent direct messages to Teen Vogue writer Lauren Duca. He also superimposed his face over her husband's in a profile photo.

In his testimony, Pierotti said his wife received Shkreli's threatening letter a few weeks later. The rest of the message read, in part, "Your husband’s arrogance is infuriating, and making an enemy out of me is a mistake."

Shkreli is currently on trial for securities fraud. He's accused of founding new companies and using them as piggy banks to pay off debts from other companies he owned — without his investors' knowledge.

Shkreli is facing multiple fraud-related charges. If convicted, he could spend up to 20 years behind bars.