Exonerees Share How They Cope With Mental Health Challenges 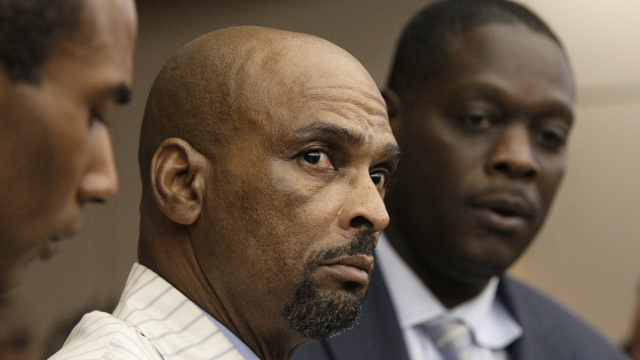 Newsy spoke with two people who lost decades of their life because of crimes they didn't commit and how they cope with all that stolen time.

Johnny Pinchback spent 27 years behind bars for a crime he didn't commit.

Pinchback was convicted of aggravated sexual assault and sentenced to 99 years in prison.

Thanks to DNA evidence and the Texas Innocence Project, Pinchback has been a free man for 11 years but says his readjustment into society has been its own challenge.

After a wrongful conviction, Jarrett Adams opened a law firm and nonprofit, Life After Justice, aimed at fixing the injustices he experienced.

Despite how tough his experience has been on his psyche, Pinchback says formal therapy didn't work for him.

"They sent a few of us to it," he said. "We were like, 'Man, we do counseling and do therapy for each other.' And that's what we did."

Chantal Fahmy is a professor at the University of Texas San Antonio and has spent her career studying the formerly incarcerated.

She says reentry into society is its own punishment and takes a toll mentally.

"Their education really hasn't changed all that much. So, it's not like they're attaining these jobs that they weren't able to get prior," she said. "They're ineligible for a lot of forms of public assistance, like welfare. They're alienated from mainstream life, period."

A study from the University of Chicago compares the mental toll of being wrongfully imprisoned to the anguish suffered by military veterans and torture survivors.

Fahmy says the resources specifically for exonerees is very limited, but for anyone leaving prison, family support can have a positive impact.

Anna Vasquez spent 13 years behind bars for a crime that never happened.

She and three other women were charged with gang raping two children, and their story was featured in the documentary "Southwest of Salem."

Ultimately, their conviction was thrown out due to inaccurate scientific testimony and an admission by the accuser that her father forced her to make false allegations.

Vasquez now serves as the director of outreach for the Innocence Project of Texas and says she hopes she can be that resource for people in her position.

"I think it brings them some comfort," she said. "You know, when I speak to them, it's not coming from an attorney, or a paralegal, you know, it is somebody that has actually been there, gone through what they're going through. … It's just hard to relate to somebody that has never been in prison."

As technology has advanced, exonerations have become more common.

In 1989, the Central Park Five boys confessed to a crime they didn't commit. Today, 36% of juvenile wrongful convictions involve a false confession.

According to the National Registry of Exonerations, more than 3,000 people have been wrongly convicted and ultimately exonerated since 1989, amounting to some 25,000 years lost behind bars.

"I'm still a work in progress, you know?" Vasquez said. "Actually, yesterday, it was my brother's, I guess, death anniversary. I don't know how I should say that, but it makes me mad when I think about [the fact] I only had two years with him. It's anger, frustration. Unbelievable that something like this could happen."

Those 3,000 people who have now been exonerated are also reintegrating into society, while dealing with unimaginable trauma and potential mental health challenges.

"Talking about your feelings or your emotions in prison was not to be done, you know?" Vasquez said. "You hid under a cover and you cried. So, the way that I coped with it was, I was hopeful. But I will not tell you that I didn't have my bad days. And you know, I was depressed, but I always seem to pick myself up."

Pinchback says the time he spends with other people who have been wrongfully convicted is his own kind of therapy.

"I've got another friend about 10 minutes from here," he said. "He did 31 years wrongfully convicted and sometimes we'll joke around and stuff like that about prison we'll be joking and stuff like, 'Hey man, I'm going to the commissary today. Would you bring me three soups?' … Then we'll say, 'Hey man, it is a blessing for that to be behind us.'"

Both Pinchback and Vasquez regularly speak to law students and tell their story with the goal of making that story less common.