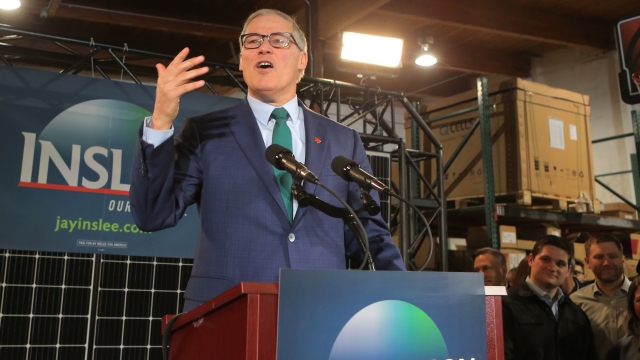 Gov. Jay Inslee said wildfires in Washington state caused the area to have the worst air quality in the world, but he left out some key details.

Researchers and air quality monitors often point to India and China as countries with the worst air pollution. So recent comments from Gov. Jay Inslee about air quality in Washington sounded surprising.

"In my state, our kids could not go outside because we had the worst air quality in the world in Washington state," Gov. Jay Inslee said.

The Democratic presidential candidate repeated that claim in an interview with The Guardian, saying, "The forest fires were so grotesque last year that we had the worst air in the world in Washington."

Wildfires and the smoke from them can absolutely cause unhealthy air. But did Washington really have the worst air in the world?

Inslee's team pointed our partners at Politifact to an NPR interview focused on the wildfires and the smoky air Washington experienced last summer. Other news articles from around the same time reported that on Aug. 21, 2018, Seattle's air quality was ranked the worst in the world ... but that list didn't include the whole world. The ranking came from AirVisual, an international air monitoring group, and it only included 85 cities with a population of 400,000 or more.

Based on AirVisual's data, it's not clear if the entire state of Washington ranked as high as Seattle while the wildfires were burning. But the Environmental Protection Agency monitors air quality across the U.S., and it recorded a spike in unhealthy air in Washington in mid-August.

So there is a nugget of truth to support Inslee's comment about bad air quality during wildfire season. But the "worst air in the world" title was pretty short-lived, and it was specific to Seattle.