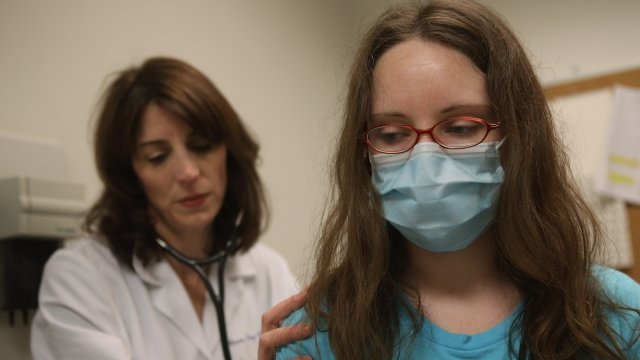 If you get the flu this upcoming season, there may be a new, fast-acting drug which helps deal with the illness more effectively than Tamiflu can.

We're still months away from the next flu season, but the Food and Drug Administration is already preparing new tools to combat the next outbreak. The agency is reportedly fast-tracking a new flu medicine unlike anything currently available in the U.S. market.

Baloxavir marboxil has been shown to cut down on flu symptoms and fever by about a day. It also shortens the time that people with the illness are sneezing and coughing, which limits the spread of the virus.

If it's approved, the medicine would be the first new class of influenza drugs to be sold in the U.S. in more than 20 years. There are only two other types of these flu medications in the American market — Tamiflu and adamantane drugs.

CDC: The Past Flu Season Broke A Record For Pediatric Deaths

According to the CDC, the 2017-2018 flu season was the deadliest on record for children, excluding pandemic seasons.

The new drug works much differently than those medications because it tries to stop the influenza life cycle very early on. When someone gets the flu, the virus finds cells in the respiratory tract and uses them to make new copies of itself. Where Tamiflu targets the flu virus itself, the new drug is designed to keep the virus from replicating in the first place.

The drug has proved popular in Japan because it's very hassle-free. It only needs to be taken once in pill form — unlike Tamiflu, which requires two pills a day for five days straight.

And experts hope that if a flu drug is easy to take, more people may opt to try it. If more people treat the sickness early on, it could stop the person-to-person spread earlier.

We could see this new medicine rolled out by the end of 2018. The FDA told the company seeking the drug's approval that it will issue a decision on whether it can be sold within the next six months.