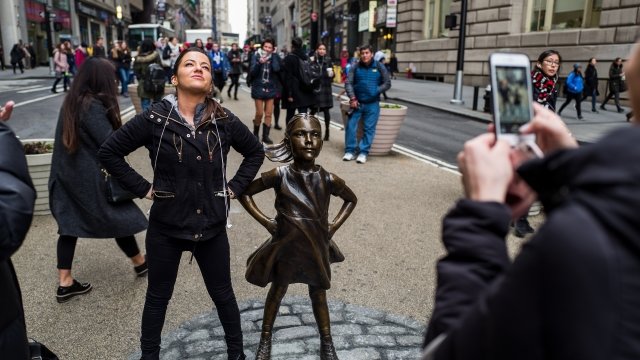 State Street Global Advisors agreed to pay a $5 million settlement over alleged pay discrimination against some female and black employees.

The firm behind "Fearless Girl," a statue meant to celebrate women in leadership, apparently doesn't pay its women leadership the same as men.

State Street Global Advisors agreed to a $5 million settlement to pay back some female and black employees whom, according to a federal audit that started in 2012, the company discriminated against.

Since at least December 2010, all the identified employees were reportedly paid less in base salary and total compensation, and the female employees also received less bonus pay. State Street denies the allegations.

The Obama-era proposal aimed to combat pay discrimination based on things like sex, race and ethnicity.

The company's agreement with the Department of Labor likely attracted more attention because of the meaning behind the "Fearless Girl" statue. It was placed in New York City's financial district in honor of International Women's Day to encourage diversity on corporate boards.

Some people — and news outlets — were quick to point to the messages as contradicting.