Fewer People Are Continuing Their Education After High School 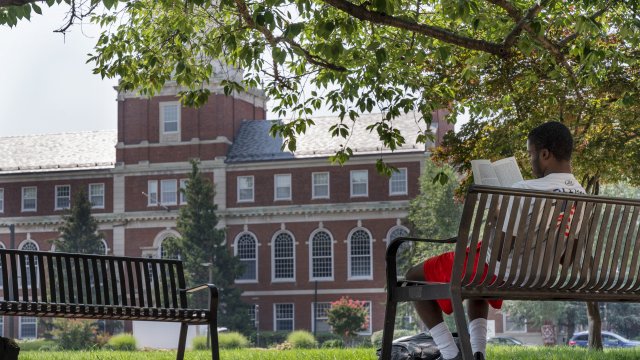 The amount of students in college classrooms is dropping, which could have long-term impacts for society as a whole.

Colleges are seeing more empty seats in the classroom now that school is back in session.

There are 4 million fewer college students than there were a decade ago. Among students who graduated high school in 2016, 70% began college that fall. In 2020, that number dropped to 63%.

There are a few possible explanations for this: Some people point to the pandemic as the main factor, as many students may have pushed college off until later to avoid learning from home in their high school bedrooms. While this could be part of it, the decline of students started long before COVID was even a thought.

Other factors should be considered, though, like cost. A Georgetown report found that between 1980 and 2020, the price of tuition, fees, and room and board for undergrad students rose by 169%, while wages for young Americans haven't increased at the same rate. Many people may simply not have the money or aren't willing to go into debt. Student loan debt is close to $30,000 on average for four-year college graduates.

Enrollment Down At Public Schools Around The Country

School enrollment is down significantly due to many parents homeschooling and enrolling their children in private schools.

But higher education experts say it's important to consider the long-term tradeoffs. Data from the Social Security Administration says that people with bachelor's degrees earn between $600,000 and $900,000 more over the course of their lifetime than someone with just a high school diploma. Data is scarce on how that advantage compares to previous generations of college graduates.

Tolani Britton, a professor who studies the economics of higher education, says it's a complex matter.

Let's take a look at those other options: One alternative is students going to a community college for two years, then transferring to a four-year school to offset costs. However, only 8% of community college students who want a bachelor's degree go on to achieve it. They face common roadblocks, like finding out most of their credits won't transfer, and they'll have to start from scratch at a four-year school to get a degree.

Another option is trade school. Programs in trades like construction, HVAC and mechanics have seen an increase in enrollment as high as 40%. The highest-paying trade jobs can make up to nearly six figures. Plus, there are apprenticeships where companies pay students to learn how to do a trade.

If a student doesn't want to go to community college or trade school, they can also go straight into the workforce after high school. Minimum wage jobs that don't require any degree or training have seen an increase in pay. About half of states raised their minimum wage this year, and a lot of companies decided to raise it on their own in recent years. But as those wages have risen, so has the cost of everything else due to inflation.

Experts wonder if the short-term gain from going straight into the workforce is worth it over pursing postsecondary education.

"Some of the questions that I would ask are, 'Are the jobs that they're taking currently, do they have advancement potential?'" Britton said. "If we think about those same jobs in 10 years and they're paying relatively similar salaries, would they be able to support themselves and a family? What does it mean for their potential children, for example, if they don't necessarily return and get a college degree?"

There are also long-term benefits to getting a degree that experts say are important to consider, like better health outcomes, both mental and physical, and the lower likelihood of being unemployed.

The declines hit all regions of the country and affected students of most races. But students of color saw some of the steepest decreases.

Jason Lane, a dean at Miami University in Ohio, told Newsy that as fewer students go to college, this could have long-term impacts for our society as a whole.

"The loss of individuals going into college will have long-term implications on the country's innovation ecosystem, on our economic productivity," Lane said. "It will make it harder for us as a country to compete internationally in terms of new knowledge development, new innovations, new inventions, things that the U.S. has historically led on."

So, what can be done to get more students back to school? Education professionals say high schools and colleges can work together to close the information gap and make sure students and their families have all of the information they need to make informed decisions about postsecondary education.

"We also need to think about, it's not just the traditional high school population," Lane said. "We've got to be reaching out to adult populations, folks who are looking to retool, to reskill, who are looking to increase, I think, their own social mobility and economic viability and the economy. To do that, we've actually got to be more accessible. We've got to find new pathways and entry points for them to come into higher education."