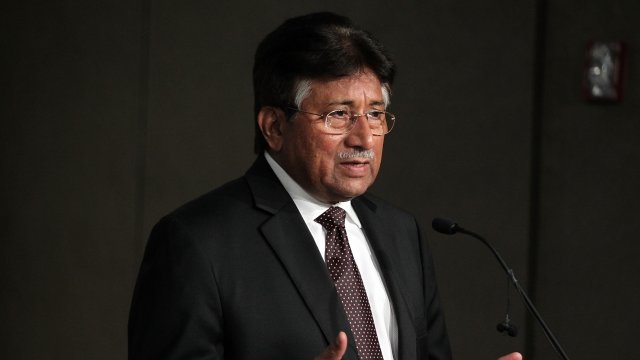 It stems back to the 2007 assassination of Pakistan's former Prime Minister Benazir Bhutto. She was killed in a suicide bomb attack while campaigning for a third term.

Musharraf was president at the time. His administration blamed the assassination on a local Taliban leader.

But a 2010 United Nations report found Bhutto's assassination could have been prevented if Musharraf's government provided better protection.

The report also said placing the blame on Taliban leader Baitullah Mehsud "was premature at best" and that it hindered police investigations into the assassination.

Police later charged Musharraf in connection with Bhutto's murder in 2013. He denied any involvement.

He was indicted on charges of murder, criminal conspiracy to murder and facilitation of murder.

Millions May Be At Risk Of Arsenic Poisoning In Pakistan

Up to 60 million people there rely on water sources that contain unsafe levels of arsenic.

Before the case could go to trial, Musharraf was allowed last year to leave Pakistan to seek medical treatment in Dubai, United Arab Emirates. He's lived there since.

Thursday's court ruling means if Musharraf returns to Pakistan, he must be arrested and brought to trial. The court also ordered his property be confiscated.

Aside from Musharraf, the court sentenced two police officers to 17 years in prison for negligence in the assassination. It acquitted five others accused in the case.