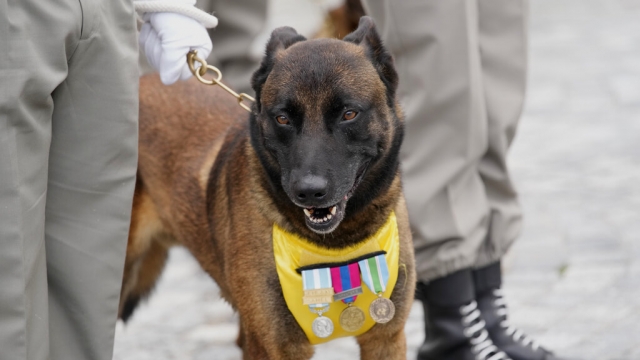 The French army's canine infantry regiment of 650 personnel attended the ceremony, along with 550 dogs wearing their medals.

It is recognition some might say is long overdue: France is paying tribute to its civilian and military "hero dogs."

A memorial sculpture depicting a World War I soldier huddling with his dog was unveiled this week in Suippes.

The northeastern town saw major battles during World War I, and it's now home to Europe's largest military kennel.

The French army's canine infantry regiment of 650 personnel attended the ceremony, along with 550 dogs wearing their medals.

Two dogs were singled out in the ceremony.

Leuk was killed in a 2019 battle with extremists in Mali.

And in 2015, Diesel was killed during the search for suspects in the Paris terror attacks.

The No. 1 reason dog parents said they're worried about returning to the office is their pet's potential anxiety or loneliness.

Johann (full name not given for security reasons), an adjutant in the regiment, says the recognition is important because the dogs carry out missions like humans, so it's fair to give them a medal for the various range of actions they accomplish.

France first began training dogs for active duty during World War I from 1914 to 1918.

The dogs searched for wounded soldiers, warned guards, and carried messages, food and ammunition to the front lines.

Audrey, another regiment member, says the dogs are used for detection because of their sense of smell, their sight and their physical abilities.

She says they use lots of Malinois and German shepherds; dogs who can run and who are resistant to the heat and cold.

The dogs are tested to see if they're enthusiastic about biting, are willing to play, and aren't startled in stressful situations.

Some are selected as puppies, but most are about 18 months old.

When they can no longer work, they are retired, and their handlers help choose families for them.

It's a well-deserved rest after years of courageous work.