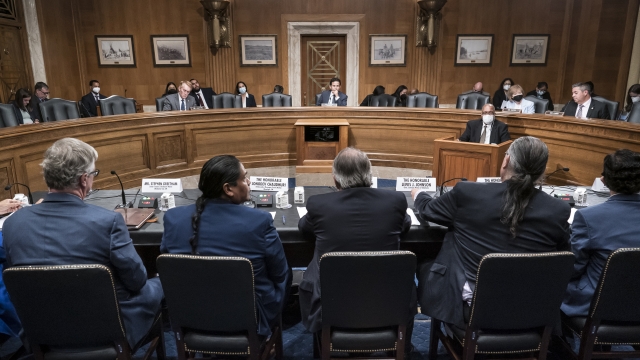 The descendants of formerly enslaved tribal citizens have been fighting on a rocky legal path for two decades for their right to be citizens.

Ean McCants' family has a long and storied history that stretches back to the days before 1907, when Oklahoma was called Indian Territory.

“My family lived in Sandtown,” McCants said. “My grandmother actually is from Sandtown in Oklahoma City, which is a neighborhood that was founded by Chickasaw Freedmen.”

McCants is a descendant of Choctaw and Chickasaw Freedmen.

Freedmen were formerly enslaved African Americans held by the Five Tribes before and after removal to Oklahoma on the Trail of Tears. They were supposed to be granted tribal citizenship by treaties signed with the U.S. government in 1866 but have been removed from the rolls since the 1980s.

One of McCants’ family members served in the Indian Home Guard during the Civil War and later survived the Tulsa Race Massacre. Despite this, he and other Freedmen descendants aren’t citizens of the Choctaw, Chickasaw or Muscogee Nation.

But in 2017 after a decades-long lawsuit, the Cherokee Nation did grant full citizenship to their Freedmen descendants.

Now, an ally of the Freedmen is hoping the Choctaw and Chickasaw Nations will do the same.

“I’m just drawn to the side that's losing, you know?” said Eli Grayson, Muscogee Nation citizen. ”I don't know why it is.”

Supreme Court Finds Much Of Oklahoma Is Native American Land

Grayson helped Cherokee Freedmen win their case and has been raising the issue with his own tribe, saying they are in violation of their 1866 Reconstruction Treaty.

“It was based on the fact that the federal government recognized you as a government, that you could do what you want to do,” Grayson said. “But there's one thing: You are going to stop enslaving people.  This is Article Two, five conditions. You won't have slavery anymore, the slaves you got are now your tribal citizens. They have an equal interest in the national funds, and they are to be treated the same as the Indians.”

So, what’s stopping the push for citizenship? Choctaw Chief Gary Batton said publicly last year that he wants to have a dialogue with Choctaw citizens about it before deciding.

Chuck Hoskin Jr., principal chief of the Cherokee Nation, has been supportive of Freedmen descendants gaining citizenship, but other tribal leaders have remained silent.

The issue of citizenship for Freedmen has been more public in the last couple of years.

In 2021, Representative Maxine Waters held a hearing in the Financial Services Committee on important funding for Indian housing. During that hearing, Cherokee Freedmen descendant Marilyn Vann raised the issue of the Freedmen being barred from essential services.

"The tribal governments receive money for the housing programs, but the majority of Freedmen are excluded,” Vann said. “I ask you to include the treaty obligation language in the final bill and support its passage in the full House."

Representative Waters has threatened to withhold housing money until the issue is handled.

The First Americans Museum is telling the collective story of Oklahoma's 39 tribes, from their cosmological origins to the present day.

Many see Freedmen gaining citizenship as a civil rights issue in Oklahoma; treaties tribes signed with the U.S. government in 1866 give them that right.

“These are my people’s fight with the Confederates to basically protect their right to enslave Black people,” Grayson said. “That was not a good feeling.

”McCants thinks it's not just the tribe’s responsibility to grant Freedmen citizenship, but it’s the U.S. government’s job, too. “We still have remained in our homes where our ancestors have been, and I think that that says something,” McCants said. “It means that regardless of if the Chickasaw Nation or the Choctaw have this conversation, we're still going to be in these nations, we’re still going to be their relatives and there's nothing about that fact that is going to change. So I think that the best thing to do is not resist that.”

The U.S. Senate Committee on Indian Affairs recently held a hearing on the issue. Activists and Freedmen communities are pushing on Deb Haaland, the secretary of the Interior Department, to take up the issue. Plus, a younger generation informed by protests for racial equity will keep bringing pressure to resolve what they see as a human rights issue.