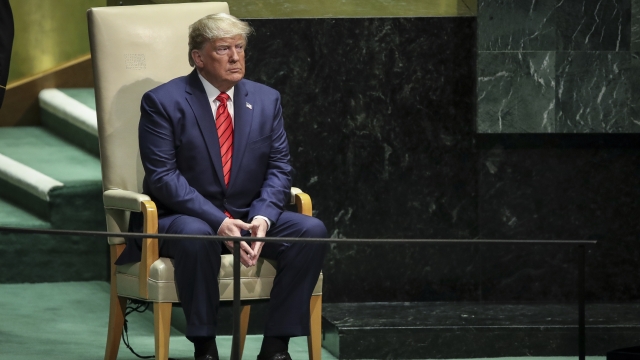 As he faces a pending impeachment trial at home, President Trump is facing major foreign policy challenges — heightened by killing of Iranian general.

Now Iraq is fearing fallout over U.S.-Iran tensions. They were accelerated by Dec. 29 U.S. airstrikes on Iranian-aligned militias that triggered violent protests at the American embassy in Baghdad and further inflamed by the attack that killed Iranian Maj. Gen. Qasem Soleimani.

Beyond that, America's longest war continues in Afghanistan. The situation in Syria is uncertain. The trade war with China continues. And President Trump tweets that his impeachment "makes it much more difficult to deal with foreign leaders."

The president is expected to survive a Senate trial over allegations he withheld military aid to pressure Ukraine to investigate former Vice President Joe Biden and his son. But his foreign policy is certain to be an election issue, with Biden tweeting Thursday that Trump had "just tossed a stick of dynamite into a tinderbox" by taking out Soleimani.

In early December, Thomas Wright of the Brookings Institution wrote that President Trump was "upending America's global role" based on his "willingness to bend U.S. foreign policy to his own ends." And before the military strikes in Iraq, Ronald Neumann, a former U.S. ambassador who heads the American Academy of Diplomacy, said Trump could "still make a lot of waves, impeachment or not.”

Now Iraq's prime minister fears exploding hostilities between the U.S. and Iran will make his country a dangerous battleground.

Adil Abdul-Mahdi said: “We also believe that this attack was not conducted based on evidence but based on impressions and positions and this is as a result of the great Iranian-American tension, which we have tried to minimize and lessen."

On New Year's Eve, President Trump hailed the Dec. 29 airstrikes in Iraq in retaliation for a militia attack that killed a U.S. contractor. And his "Happy New Year" tweet warned that Iran will pay "a very BIG PRICE" for future attacks. But he insisted he wasn't clamoring for war.

“I don’t think that would be a good idea for Iran. It wouldn’t last very long. Do I want to? No. I want to have peace. I like peace."