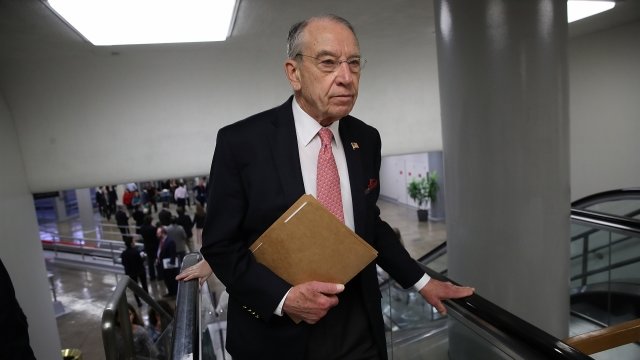 The U.S. senator told a radio host he'd like to fill any potential Supreme Court vacancy before the November midterm elections.

The chairman of the Senate Judiciary Committee told radio host Hugh Hewitt on Thursday that if there's a Supreme Court vacancy that needs to be filled, he wants to get it done before the November midterm elections.

Grassley said, "So my message to any one of the nine Supreme Court justices: If you're thinking about quitting this year, do it yesterday."

The name that keeps popping up for possible retirement is Justice Anthony Kennedy. He's been the subject of retirement rumors for more than a year now.

A new documentary about the rise of U.S. Supreme Court Justice Ruth Bader Ginsburg comes out in select theaters Friday, May 4.

Kennedy, who's turning 82 in July, is the key swing vote on the court. And if he were to retire relatively soon, a conservative nominee would most likely be nominated to take his place.

Now, Kennedy hasn't said he plans to retire. And Supreme Court justices technically have the job for life if they want.

Grassley later clarified he was just trying to point out how long the confirmation process can be for a Supreme Court nominee and that he wasn't trying to push any justice into retirement.