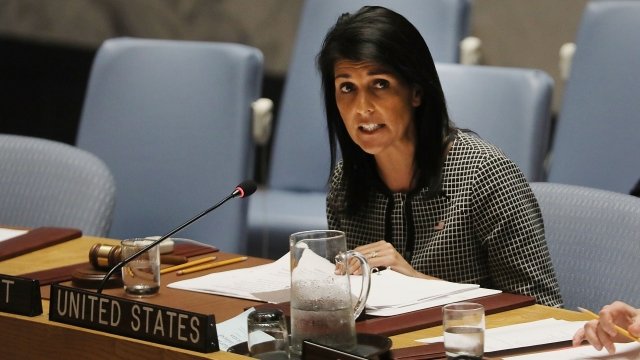 U.S. Ambassador to the U.N. Nikki Haley warned member countries that Trump asked her to "report back on those countries who voted against us."

On Thursday, it will vote on a non-binding resolution criticizing Trump's decision to recognize Jerusalem as the capital of Israel.

Haley reportedly sent a letter to the delegations of more than 180 countries Tuesday, warning them that Trump has asked her to "report back on those countries who voted against us."

She is perhaps looking for a better result Thursday than what happened in last week's U.N. Security Council vote on a similar resolution. The U.S. vetoed that resolution after the other 14 members voted in favor of it.

The U.S. does not have such veto power in the General Assembly. But again, Thursday's vote is symbolic and wouldn't have any actual ramifications for the U.S. or Israel.