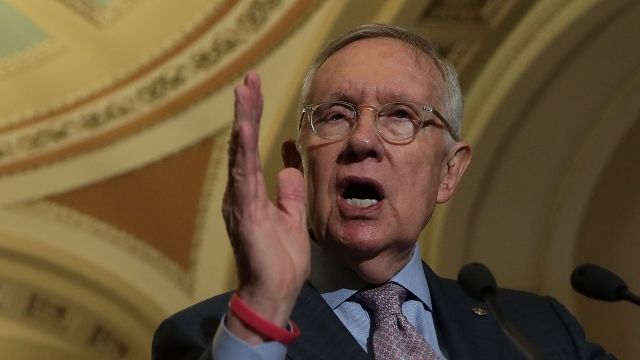 The outgoing senator called on President-elect Donald Trump to "roll back the tide of hate he unleashed."

Donald Trump's win early Wednesday morning shocked much of America. Now some of the country's top Democrats are pledging to fight the hate and bigotry that seemed to follow Trump's campaign.

Outgoing U.S. Sen. Harry Reid of Nevada released a statement Friday condemning the rhetoric of Trump's campaign. He wrote, "If Trump wants to roll back the tide of hate he unleashed, he has a tremendous amount of work to do, and he must begin immediately."

Reid wrote, "I have heard more stories in the past 48 hours of Americans living in fear of their own government and their fellow Americans than I can remember hearing in five decades in politics."

Reid is certainly not the only high-profile politician commenting on Trump's election.

In an op-ed article for Medium, Sen. Elizabeth Warren of Massachusetts echoed Reid's concerns but promised to work with President-elect Trump to fight Wall Street and other economic injustices.

Warren wrote, "If Trump is ready to go on rebuilding economic security for millions of Americans, so am I and so are a lot of other people — Democrats and Republicans."

Sen. Bernie Sanders of Vermont also promised to support Trump's efforts to help working families but explained that his support is limited. In a statement Sanders wrote, "To the degree that he pursues racist, sexist, xenophobic and anti-environment policies, we will vigorously oppose him."

President Obama and Hillary Clinton both said regardless of politics, the peaceful transition of power is key to democracy in the U.S. After meeting with Trump, Obama said if Trump succeeds as president, we'll succeed as a country.