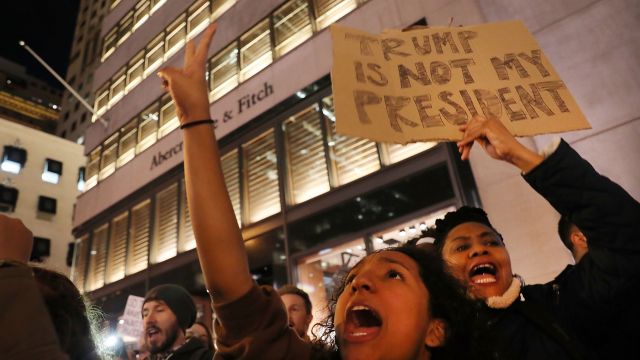 Anti-Trump protests have continued in major cities, and there are some reports of Trump-related violence.

The visceral reaction to Donald Trump's election victory hasn't abated — and in some cases, it's turning violent.

For two nights in a row, demonstrators against Trump have flooded the streets of major cities across the U.S. The protests have been largely peaceful, though there have been several arrests and reports of vandalism.

SEE MORE: These Chicagoans Refuse To Unite For A Donald Trump Presidency

Protesters marched outside of Trump's towers in New York City and Chicago — at least five people were arrested in Chicago on Wednesday night, and at least 15 were arrested in New York. Several fires were set in the streets of Oakland, and protesters in Los Angeles torched an effigy of Trump.

And DNAInfo Chicago posted video of a group of people attacking a man while yelling, "Don't vote Trump!"

Chicago Police said the assault was tied to a traffic incident. The victim was transported to a nearby hospital. No suspects have been taken into custody yet.

There have been several reports of harassment targeting minorities after the election, including racist graffiti and an assault on a Muslim student in California. Another Muslim student in Louisiana initially claimed she was assaulted by Trump supporters but later admitted she made the story up.

According to the Southern Poverty Law Center, Trump's campaign has increased the level of racial and ethic tension in U.S. classrooms. Utah outlets reported a Latino student was taunted by his classmates after Trump's victory.