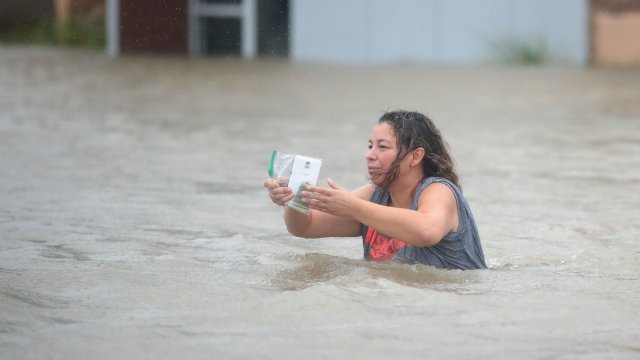 Harvey victims are posting their home addresses to ask for help, but officials say that's not the best idea.

Tropical Storm Harvey has dumped a record-breaking rainfall of nearly 50 inches over parts of Texas — and it isn't even over yet. Over 30,000 people are expected to need shelter after the storm passes. As the crisis continues, people in need are turning to social media both for information and to call for help.

For those without a TV or radio, smartphones and social media can often be the only source for alerts and only method of communication.

Hurricane Sandy prompted over 20 million tweets about the storm, including posts from companies about where those affected could find aid.

But emergency officials are wary of the service. Both Houston police and the U.S. Coast Guard urged people to report emergencies to 911 or Houston Command Centers — not to social media. Even if officials don't answer immediately, they say it's important to stay on the line.

Emergency officials have also had to debunk misinformation that's gone viral on social media. One of the "viral online scams" includes a false phone number for the National Guard that actually takes people to an insurance company.

The company, Foremost Insurance, released a statement saying it didn't release the phone number, and that the viral post was created by an "unidentified person."

During emergencies, it's important to verify information and avoid blindly sharing misinformation. Official sources, such as verified news agencies and government organizations, are the most credible sources of information.

And if information is verified, sharing it could save lives. After a photo of a flooded nursing home went viral, emergency management groups were able to find and rescue the senior citizens.

Beyond official pages, informal local groups can also provide information on what's going on and how people can help. A "Harvey Flood Rescue" account was created to curate calls for help and aid volunteers in rescue efforts. As of Tuesday afternoon, more than 3,000 households had called for rescue, and more than 130 rescues had been recorded.

Beverage Companies Step Up To Help After Hurricane Harvey

One beer company is sending more than 150,000 cans of canned drinking water to communities affected by Harvey, once a Category 4 hurricane.

Local unofficial Facebook groups were created for similar purposes, and one of the groups was even specifically made to help rescue pets.

Plenty of tech companies have policies in place to help people in emergency situations. Facebook developed Safety Check to let users tell friends they're safe while most smartphones have automatic alert systems in place for extreme weather conditions.