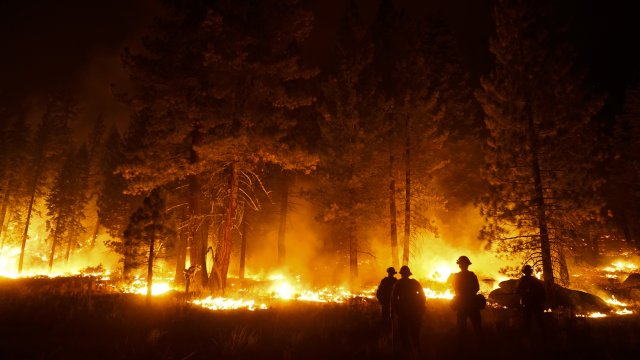 A fire watch is in effect until Friday night across most of Northern California.

The interior of California was very hot and dry Wednesday and the forecast called for a risk of fire-starting dry lightning as thousands of firefighters already have their hands full with wildland blazes that have been burning for weeks.

A National Weather Service heat advisory stretched down the Central Valley and through inland Southern California, with an excessive heat warning extending eastward across the desert into Nevada.

The state energy grid operator called for voluntary conservation of electricity from 4-9 p.m. because of expected high demand for air conditioning. The alert ended without any major power outages reported but the conservation request was extended to 4-9 p.m. Thursday.

A fire weather watch was issued for Thursday evening through Friday evening in much of the interior of Northern California due to a weather system that is expected to bring a chance of thunderstorms with lightning and erratic gusts.

“The combination of possible dry lightning as well as strong winds with the dry fuels could lead to critical fire weather conditions,” forecasters wrote.

Nearly 15,000 firefighters were making progress on 14 major wildfires and several smaller new fires, the California Department of Forestry and Fire Protection said. They include three of the state’s 20 largest fires on record.

In the northern Sierra Nevada and southern Cascades region, the second-largest fire in California history has scorched nearly 1,441 square miles. The Dixie Fire was 59% contained but new evacuation orders were issued for part of Shasta County.

More than 1,280 structures have been destroyed, including 688 individual homes.

Meanwhile, the entire state is showing the potential for extreme fire danger in the next three months.

To the south in the Sierra near Lake Tahoe, the nearly 340-square-mile Caldor Fire remained 50% contained. Firefighters have had enough success against the state’s 15th-largest fire that residents of the city of South Lake Tahoe were allowed to return home last weekend. With inspections 95% completed, nearly 1,000 structures have been counted destroyed, including 776 single-family homes.

The four large casino hotels in Stateline, Nevada, began reopening Tuesday including the Hard Rock Lake Tahoe, which is still being used as a command center for firefighters and emergency personnel. The Montbleu Resort, Casino and Spa resumed operations Wednesday.

In the mountains of the far north coast, the state’s 18th-largest fire has ravaged more than 310 square miles of the Shasta-Trinity National Forest. The Monument Fire was 45% contained but remained a threat to more than 10,500 structures.

California has experienced increasingly larger and deadlier wildfires in recent years as climate change has made the U.S. West much warmer and drier over the past 30 years. Scientists have said weather will continue to be more extreme and wildfires more frequent, destructive and unpredictable.