What Happens In A Diversity Training And How Success Is Measured 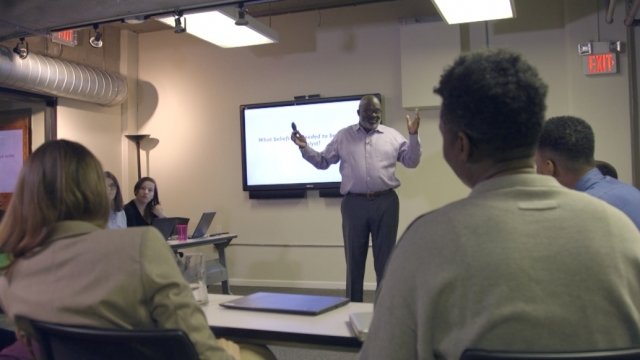 There are different approaches and strategies to diversity training. We went to one to see what it's like.

The closing of thousands of Starbucks stores on May 29 for racial bias training has started a conversation on what companies could and should do to educate employees about diversity.

That training is in response to the two black men arrested at a Starbucks in Philadelphia after a manager called police because the men had yet to order anything.

Starbucks hasn't publicly shared what its training will consist of, but we wanted to know what usually happens at a diversity training. Newsy went to the Kaleidoscope Group to find out and talk to Doug Harris, an expert who helps train companies on diversity and inclusion.

Amazon is one of the latest companies to utilize the Rooney Rule.

"Normally when we go into a company, they have a vision of success, they have an assessment of what's the problems today: 'Here's our strategy that we're going to use as it relates to succeeding.' And then based on that, how we're going to educate people. And so then we set up a long term, like three-year education strategy — each of those designs being very unique. Similar content, but organized towards them achieving their vision," Harris said.

The Kaleidoscope Group trainings are broken into different segments to facilitate conversation.

"Our goal is about creating an environment that's inclusive, that values and leverages the difference. … When people begin to shift their thoughts and beliefs, that's good. But we really want the outcome to be people showing up and doing things differently. Behaviors is what we're really measuring. We're not psychiatrists trying to change your thoughts and beliefs, but we are saying you need to address those if you're going to be able to implement this behavior. You need to be courageous," Harris said.

For companies implementing diversity training, there's a difference between wanting actual change and just checking off a box for legal purposes.

Harris said: "I think the key to that — is it the initial step, or is it the only step, is it the next step? … If it's the only step as a box check, you know, 'Hey, we did it' ... . If it's the beginning step, it can be seen as very impactful — 'We're serious and now we're going to reinforce it with this next step and this next step and this next step.' So if we were to come in and support them, we create a strategy where the initial step will be seen as just creating the alignment, enlightenment and then now the importance of what we're dealing with."

As for Starbucks, the coffee chain is making changes aside from the racial bias training. The company announced it will even let people who don't buy anything sit in its stores or use its bathrooms. These changes could mean the store is serious about implementing lasting change.