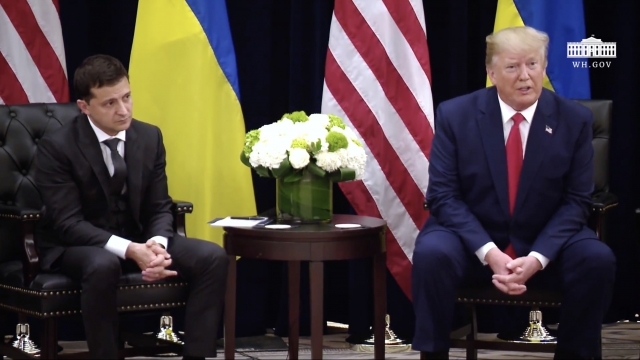 The complaint says White House officials took steps to hide the contents of a call between President Trump and President Zelenskyy.

The House Intelligence Committee has released an unclassified version of the whistleblower complaint made against President Donald Trump.

The nine-page release confirms much of the previous media reporting about it. The whistleblower's concerns center around a July 25 phone call between President Donald Trump and Ukrainian President Volodymyr Zelenskyy. A memo recapping that call showed President Trump pressured Zelenskyy to investigate Joe Biden and his son, Hunter.

Something new in the complaint is the steps White House officials reportedly took to hide the contents of that call. The whistleblower said multiple senior officials "intervened to 'lock down' all records of the phone call, especially the official word-for-word transcript." It's worth noting that the document released by the White House on Wednesday is not a transcript; rather, it's a "memorandum of a telephone conversation" based on notes and recollections of people who were listening in.

All of this took place as Ukrainian aid was being delayed. In the days immediately before and after the phone call, the complaint says the Office of Management and Budget "stated explicitly that the instruction to suspend this assistance had come directly from the President, but [the officials] still were unaware of a policy rationale."

The Ukrainians reportedly understood that President Zelenskyy needed to show he was ready to "play ball" before he would get a meeting or phone call with President Trump. But it's unclear how the delayed aid money fit into that equation.

The whistleblower explicitly accuses President Trump of using his position to get a foreign country to influence the 2020 election by investigating one of his political rivals. The president denies any wrongdoing.