Full House To Vote On Procedures For Impeachment Inquiry 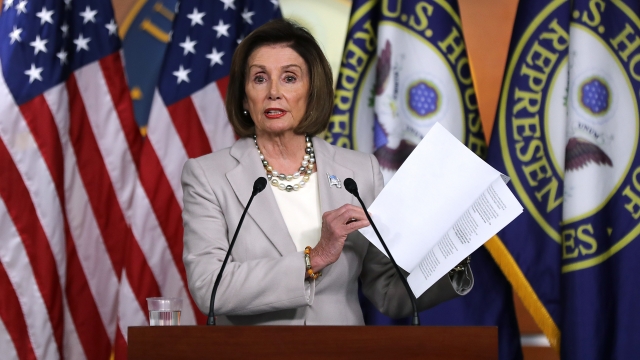 The full House will get a chance to vote Thursday. Republicans have said without such a vote, the inquiry is illegitimate.

The House of Representatives will hold a vote on Thursday to formalize the next steps of the impeachment inquiry into President Donald Trump.

House Speaker Nancy Pelosi announced Monday the House will vote on a resolution to establish the rules for public hearings, subpoenas and "due process rights for the President and his Counsel."

The inquiry has faced widespread criticism from Republican lawmakers who allege it was illegitimate because the full House had not voted on it. Pelosi maintained her position that "the Constitution provides that the [House] 'shall have the sole Power of Impeachment,'" and added that a federal judged confirmed as much in a ruling last week.

House Minority Leader Kevin McCarthy, one of the earliest critics of the inquiry, responded to the news in a tweet, saying: "It's been 34 days since Nancy Pelosi unilaterally declared her impeachment inquiry. Today's backtracking is an admission that this process has been botched from the start. We will not legitimize [Pelosi and Rep. Adam Schiff's] sham impeachment."

White House press secretary Stephanie Grisham echoed McCarthy's sentiments in statement, adding that the White House "won't be able to comment fully" on the resolution until it sees "the actual text."