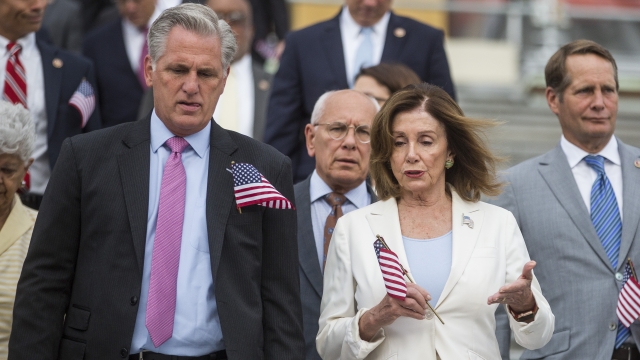 McCarthy sent a letter to Pelosi on Thursday asking her to press pause "until transparent and equitable rules and procedures are established to govern the inquiry." He also asked Pelosi to publicly answer a list of questions, including whether she intends to have the full House vote on authorizing the inquiry.

The House Speaker responded to McCarthy in a letter later in the day, saying "existing rules [...] provide House Committees with full authority to conduct investigations for all matters under their jurisdiction, including impeachment investigations." She added that there aren't any House or constitutional rules that require the whole chamber to vote before starting an impeachment inquiry. She also said that she'd received his letter "shortly after the world witnessed President Trump on national television asking yet another foreign power to interfere in the upcoming 2020 elections."

While speaking to reporters on Thursday, President Trump said the Chinese government should investigate former Vice President Joe Biden and his son.

"China should start an investigation into the Bidens because what happened in China is just about as bad as what happened with Ukraine," President Trump said.

President Trump and his allies have alleged that Biden's son made more than $1 billion in business dealings in China due to his father's position. Despite multiple accusations, no evidence of corruption on the part of the former vice president or his son has come to light.

The president also reiterated his stance that Ukraine "should investigate the Bidens" on Thursday.