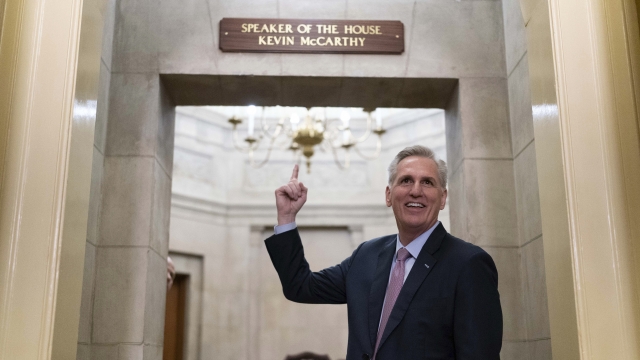 In his acceptance speech, Kevin McCarthy promised the House would be a check on the president and his policies.

His win came after an intense moment on the House floor and after making concessions to win House speakership.

Passing bills through Congress will be tough as Democrats continue to have control of the Senate and the White House.

In his acceptance speech, he promised the House would be a check on the president and his policies.

McCarthy plans to tackle issues like inflation and border security.

Issues like funding the government will test both sides.

On NBC's "Meet the Press" Sunday, new House Minority Leader Hakeem Jeffries said he and the new speaker have had positive conversations.

The House was finally able to swear in newly elected lawmakers who had been waiting all week for the chamber to formally open.

"Clearly, we are going to have strong disagreements at times. But we can agree to disagree without being disagreeable. That is what I believe the American people would like to see in terms of a functional House, a functional Senate, a functional government," said Jeffries.

Up first, Congress will have to pass a new set of House rules.

It also reinstates the Holman Rule, which lets lawmakers offer amendments to appropriations legislation that would reduce the salary of government officials.

Also included: votes on bills popular among Republicans like border security and abortion.

Republican Rep. Nancy Mace told CBS' "Face the Nation" she's on the fence regarding her vote for the rules package.

"What is going to be a problem is if the American people will be held captive over the next two years to the extreme MAGA Republican agenda that apparently has been negotiated in the House rules and the functioning of the Congress," said Jeffries.

Lawmakers are expected to vote on the House rules package Monday.