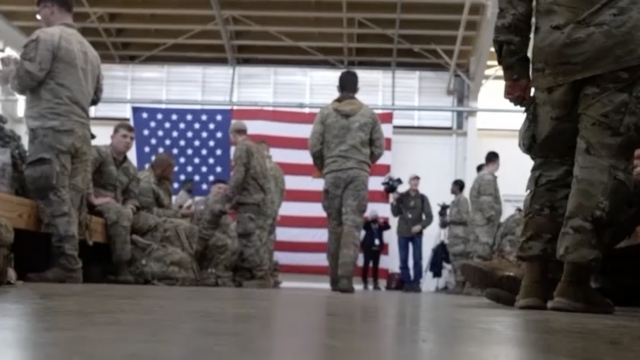 While civilians across the country feel the pressure of today's economy and housing market.

It's no different for service members and their families who face frequent moves by the military, sometimes having to relocate to more expensive areas.

The Defense Department is taking steps to help alleviate some of the costs.

"I hear stories every day, whether it is through people I know personally, or families that I work with," Ceasarae Galvan said. "There's just not enough money to solve all of the problems, and there's not enough resources out there to compensate."

Galvan is the director of the AFHA's Justice, Equity, Diversity and Inclusion board. She says there are families they hear from who can't find housing, pointing to things like availability in the military market or challenges in the civilian market.

"When there's a 12 or 18-month wait list to get that housing, it's almost like that benefit that you were promised doesn't even exist for you," Galvan continued. "And so, then, you're forced out into the civilian housing market, unexpectedly. And so, you're dealing with all of the normal things that civilians are, with housing and with the housing market, and it's snowballing into other issues."

In recent months, the U.S. government has taken some steps to improve food security for its service members — but there's more to do.

A September survey from Blue Star Families found families spending more out of pocket and more time in temporary lodging between moves.

"We see families put in these impossible situations where they're choosing between, 'Okay, I'm gonna pay my bills, pay my utilities, I'm gonna pay my mortgage, my rent, or I'm going to pay for healthy, nutritious food for families,'" said Shannon Razsadin, president and executive director of Military Family Advisory Network. "And so it creates a cycle that's really, really difficult. And with the moves every two and a half years, it puts people in a tricky spot. Another challenging factor has been that the basic allowance for housing has not necessarily kept up with the cost of inflation in the housing markets."

NEWSY'S HALEY BULL: When you look at the Department of Defense's announcement for 2023 — those increased rates. Is it going far enough?

SHANNON RAZSADIN: You know, that remains to be seen.

For 2023, the Pentagon announced the basic allowance for housing rate will increase an average of 12.1%

From day one, Pentagon Press Secretary Brigadier General Pat Ryder has been crystal-clear that taking care of our service members and their families is a sacred obligation and a national security imperative.

A bureaucratic oversight is costing thousands of military families critical benefits to keep them from going hungry, especially in high-rent cities.

This year's National Defense Authorization Act includes a 4.6% pay raise, increases the threshold for the basic needs allowance, adds funds for the basic allowance for housing and extends flexibility for adjusting it in higher cost areas.

Newsy sat down with Congresswoman Marilyn Strickland, whose district includes Joint Base Lewis-McChord in Washington state.

"I'm trying to do two things," Strickland said. "Number one: Look at the basic allowance for housing to see if it is as fully restored as it can be — trying to obviously increase the supply of housing. And then, looking at [whether] we can build more housing on post."

Strickland hopes to reach across the aisle in the next Congress on housing, basic allowance and childcare.

"There are some states where the cost of living is lower because they have more home and they will have more housing available is different," she said. "But when you move to a place in JBLM, admittedly, where the cost of living is high, we have to do what we can to make sure that housing is affordable, that families do not have to rely on food banks and food stamps, and that spouses are able to work. And again, the formula that's part of that is looking at childcare and eldercare."

In the meantime, non-profits are working to help provide relief to military families.

"It's a very subtle form of economic relief for those active duty families, and Guard and Reserve that are in our junior-enlisted pay grades," asid Brig. Gen. Robert D. Thomas, Operation Homefront chief operating officer.

They're steps to help bring some relief to families who sacrifice so much for our country.

By U.S. Department of Defense / AP

The bill provides nearly $858 billion for national defense in addition to taking away a COVID vaccine mandate for U.S. military members.