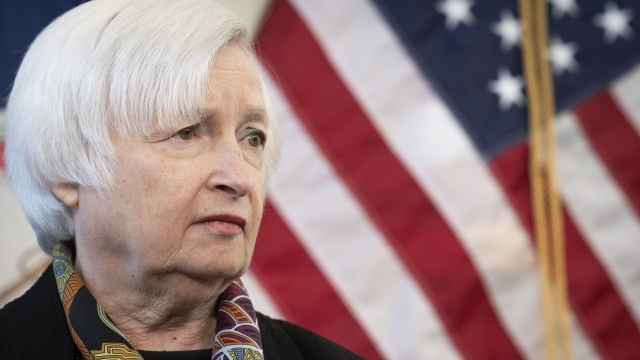 If the government hits the cap on how much money it can borrow, the Treasury Department will begin using so-called "extraordinary measures" to pay its bills. That includes selling existing investments or suspending reinvestments in retirement and health funds.

Treasury Secretary Janet Yellen warned she'll exhaust her bill-paying options sometime in June and after that, the U.S. would default on its debts.

That has never happened before, and experts say it would have "catastrophic" economic consequences.

Millions of people would stop receiving their Social Security payments and Medicare disbursements; Military service members and government workers wouldn't get paychecks; And the country's credit rating could be downgraded, potentially tanking the markets and spiking interest rates.

Why the U.S. has a debt ceiling, while most other countries don't

The U.S. debt ceiling was raised by $2.5T, but it's been raised dozens of times since its 1917 creation.

They back a plan that would have the Treasury pay some bills as they come due after the debt limit is reached.

The White House says there will be no negotiations.

"This is not a plan. It is a recipe for economic catastrophe. As President Biden has made clear, Congress must deal with the debt limit and must do so without conditions," White House Press Secretary Karine Jean-Pierre said.

With economists warning a default could lead to a global financial crisis, the pressure will build in the coming months for both sides to find common ground.

Some lawmakers are trying to sneak a version of the expanded child tax credit back into law by including it in the federal budget.