How Countries Outside The US Have Handled Controversial Statues 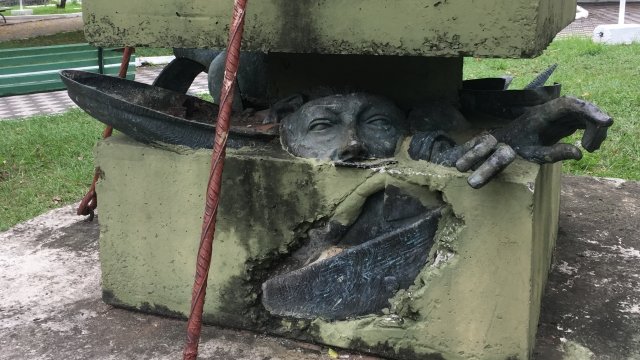 When statues are removed, the decision is often controversial — no matter where you live in the world.

The debate around removing statues and monuments isn't new and certainly isn't exclusive to the U.S.

"There are a range of options available dealing with these very controversial monuments," journalist Laurence Blair said. "It's not just a case of knock it down or leave it there."

In Paraguay, for example, a statue of a former dictator was creatively re-invented. Journalist Laurence Blair reports on South America and noticed the statue when he lived in Paraguay.

"Carlos Colombino, this artist came up with his idea to do what he did, which was cut it up into bits, stick it between two bits of concrete and put it into a plaza ... which commemorates those who disappeared under [Alfredo] Stroessner's regime," Blair said.

For countries around the world with complicated histories — like colonization or strict authoritarian leaders — removing statues from public areas can be seen as a way to move forward.

In Taiwan, a memorial hall and buzzing tourist spot has a massive bronze statue of Chiang Kai-shek, a former dictator. But some lawmakers in the country want it removed.

Chiang was pro-China and once ordered troops to calm down rallies in Taiwan, which lead to the deaths of at least 18,000 people.

Chiang memorials in other parts of the country are looming reminders of Chinese colonialism, not Taiwanese nationalism. Many of the statues have been moved to a park in Taoyuan, Taiwan.

"This process of removal can actually be a healing process," Blair said.

Healing is what some in South Africa say they wanted as they demanded a statue of Cecil Rhodes, a former British colonist, to be removed from the University of Cape Town.

"A statue has a purpose, and it has a real-life effect, whether we admit it or not," Blair said.

But removing a statue, and some would say that act also removes the history the statue represents, can be extremely divisive.

"Statues and monuments are not neutral," Blair said. "They're not a sort of impartial dispassionate record of some moment in history. They are always incredibly political in terms of when they were put up, why they were put up, for what reason. And I think some people can say they're somehow sacred or they can't be touched because a part of history, I think, is kind of denying a little bit what's going on behind the statue."

So, what's the resolution? Blair has a suggestion:

"A good compromise to those saying, in different contexts saying: 'You know, we can't erase history.' We have to remember the past is to say, 'OK, fine. The statue is going to be altered or changed, but what we are going to do is impose mandatory education about these figures in school, and we're going to discuss really who they were. We're going to really get to the bottom of it.'"

Education is an approach Germany uses now, after erasing Nazi monuments around the country.

"I think if the people who are defending the statues would listen to that idea, then maybe defending history isn't what they're main motivation is," Blair said.

Of course, removing a statue doesn't mean a country suddenly is reborn.

When the Saddam Hussein statue in Iraq was brought down, it marked the end of his bronze legacy, but it didn't reverse his impact on the country.

"If you want to keep a statue, fine keep it," Blair said, "but let's do something to show it's not being honored, it's not being worshiped; we're putting it in context, so it's actually a bit more of an inclusive monument."