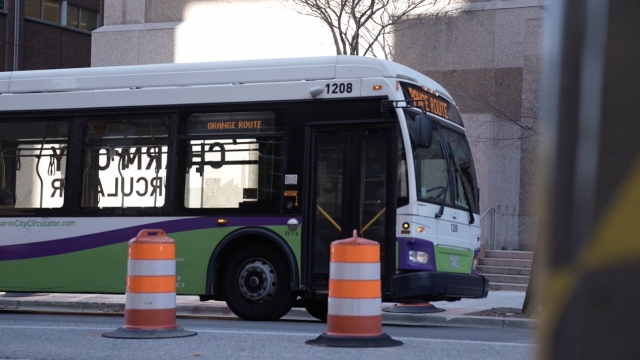 Unreliable transit systems are one issue keeping people from getting routine health care.

From aging, unreliable public transit systems to crumbling sidewalks and streets, many older Americans are facing more hurdles than ever when it comes to receiving routine medical care.

Dr. Jason Falvey studies physical rehabilitation at the University of Maryland School of Medicine. Most of his patients are elderly and rely on public transit to get to their appointments.

In the last few years, he's noticed many of them struggling to keep up with routine check-ups because of faulty public transit systems.

QR Codes Are Reshaping Public Transit, But Are They Safe?

QR codes are great for concert tickets and sporting events, but are they practical for city buses and subways?

So, Dr. Falvey started studying the impacts of public transit on public health. He found that most older Americans typically walk five to six blocks to a bus or subway station. Sometimes that walk can be upwards of a mile, which can be scary in a myriad of ways.

"That creates a lot of barriers if you have any physical disability, even the risk of violent crime—many older adults told me they fear being mugged because they have to walk with a cane and fear being an easy target for someone in their neighborhood," he noted.

Unreliable transit systems are one issue that keeps people from getting routine health care but so are the countless miles of crumbling American sidewalks, which create dangerous trip hazards, especially for older people.

"If they stick their cane in a hole in the sidewalk, they're at high risk for a stumble or fall, even if that happens once it creates a fear that people stop going out as much," he added.

When three million older Americans rely on public transit to get around, just one fall or bad experience can create a ripple effect. Dr. Falvey hopes his research leads to more funding for public transit infrastructure that keeps older adults in mind.

"We're concerned there are probably a lot of gaps in care disproportionately impacting people who rely on public transportation," he said.