How Did The Senate Handle Witnesses For Clinton's Impeachment Trial? 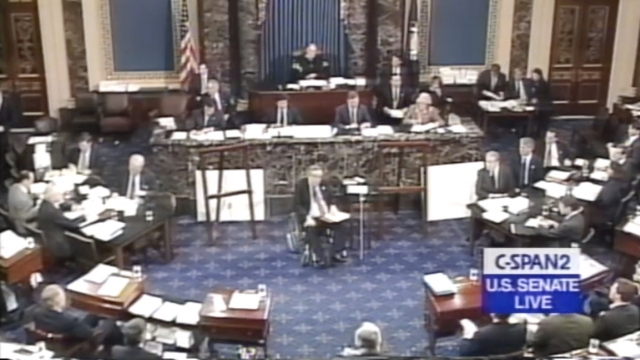 Rules for Clinton's impeachment trial passed the Senate 100-0. But that doesn't mean there weren't any disagreements on what should happen.

"A majority of the Senate has decided that the first phase of an impeachment trial should track closely with the unanimous bipartisan precedent that all 100 senators supported for the first phase of the Clinton trial back in 1999," Senate Majority Leader Mitch McConnell said.

The resolution that spelled out the rules for Clinton's trial did pass the Senate 100-0. But that doesn't mean there weren't any disagreements on what should happen.

"Now indeed is the time to stop the legal gymnastics and legal hairsplitting and to deal with these charges and these facts appropriately. As a House Manager, I believe I can speak for all of us out of a sense of fairness and again request that we and the president be permitted to call witnesses," Rep. Ed Bryant said in 1999.

"The House Managers submit witnesses are essential to give heightened credence to whatever judgement the Senate chooses to make on each of the articles of impeachment against President Clinton," Rep. Jim Sensenbrenner said in 1999.

The Clinton rules gave both sides 24 hours to present their case, but they weren't allowed to introduce new information. Then time was allotted for senators to ask questions, and after that both sides were allowed to submit motions to subpoena witnesses or present new evidence.

So it wasn't until three weeks after President Clinton's impeachment trial began that the Senate directly addressed the issue of witnesses. In a 54-44 vote, the Senate passed a resolution approving subpoenas for three people: Sidney Blumenthal, Monica Lewinsky, and Vernon Jordan.

The rules required all three to be deposed behind closed doors first, and ultimately none of them testified live before the Senate. Instead, portions of the videotaped depositions were played during the trial.

Sen. McConnell says he has the votes to approve rules for President Trump's trial. He says they're based on the "Clinton model," but he hasn't released the text of his proposed resolution.