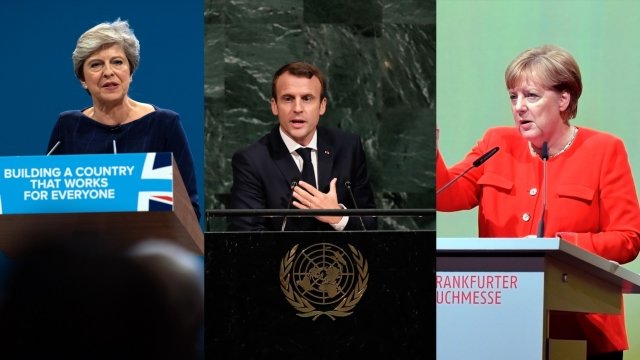 President Donald Trump decided to decertify the Iran nuclear deal Friday, but the U.S. isn't the only country involved in the agreement.

France, Germany, the United Kingdom, Russia, China and Iran all signed the 2015 deal, and they're speaking out against Trump's decision.

The leaders of France, Germany and the U.K. released a joint statement saying they "stand committed" to the deal.

And Russia said Trump's decision was doomed to fail and that decertifying the deal wouldn't really impact the agreement's implementation.

Iran's president said the nuclear deal couldn't be ended by a single country. But the country has also warned it might withdraw from the deal because of sanctions.

Not everyone was upset, though. Israeli Prime Minister Benjamin Netanyahu said the decision was a sign Trump wants to "confront Iran's terrorist regime."

Back at home, reactions in Congress have been mixed. Democratic Rep. Adam Schiff said Congress shouldn't act on Trump's decertification for fear of undermining U.S. credibility on its other international committments.

But a joint statement by four House Republicans said they'd be working with the president to "hold Iran strictly accountable" and counter Iranian threats.

By decertifying the deal Trump kicks the issue to Congress, which now has 60 days to decide if economic sanctions should be reimposed.