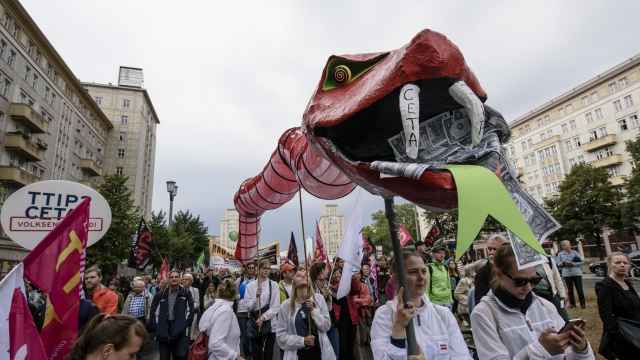 Hundreds of thousands of people across Germany are protesting international trade deals they believe will have adverse effects on the country as a whole.

Negotiations for the Transatlantic Trade and Investment Partnership, or TTIP, started in 2013 — but even then, the deal wasn't really met with much enthusiasm.

Demonstrators took over the streets in major cities like Berlin, Munich and Hamburg. Many Germans worry the deal will affect the country's strict environmental protection laws and lower the quality standards on imported goods.

Germany has some of the strictest regulations for food and goods in the world — passing TTIP would mean American goods that don't abide by those standards will be let in.

The goal of the partnership is to cut tariffs and barriers on imports and exports. The deal would also create the largest free market in the world with around 850 million consumers.

Despite German Chancellor Angela Merkel's backing of the deal, many Germans — including Vice Chancellor Sigmar Gabriel — are still opposed. A major concern is that the partnership could lead to more outsourcing and the loss of jobs.

TTIP is not the only trade agreement on Germany's radar. CETA, a similar, but smaller version of this deal is set to be signed between Canada and the European Union in October.