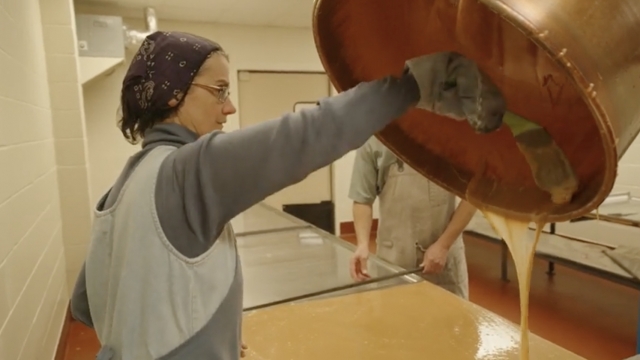 Along the Mississippi river bordering the state of Illinois is Dubuque, Iowa.

There, the Catholic sisters of the Mississippi Abbey start their day with prayers — a large part of their ministry.

As Trappistine nuns, they spend most of their time in silence. But after prayers are done, some trade in their habit for a hair net and a different kind of devotion: candy making.

Sister Kathleen O'Neill took Newsy on a tour of Monastery Candy, showing where the caramel is mixed and cut with their "magic touch."

"The caramel product itself is so good," Sister Kathleen said. "It's not so easy to find something that is such high quality that everybody loves."

Since the 1960s, the sisters have been making creamy caramels on their 600-acre site. The holiday season is their busiest time of year, as more people purchase the sweet assortments as gifts.

"We work together as a community," Sister Christine Reinhart said. "It's one job that we have where everyone, pretty well everybody, can come and work."

For Sister Madeline Beverly, all access to candy isn't the best part of the job; it's all about connections.

"It's really good to see people's names," Sister Beverly said. "It's amazing how far and wide that candy goes. For me, it just brings actual people. I can't see their faces, but I can hold their names, and it just brings the world in."

The sisters sell 72,000 pounds of candy a year online and ship it nationally. It's their main source of income to cover their living expenses.

Yes To The Bless: Year One As A Millennial Nun

Emily Persicketti is in her twenties, had a career as a pediatric nurse and decided to leave it all to enter religious life.

"We're called to pray while we while we work," Sister Madeline said. "Our life is really hidden and unseen, but our hands get to make and send out kind of a small symbol of our prayer."

Sister Kathleen said they haven't seen a decline of nuns in their monastery, but nationwide and global numbers show a different story, with a large drop of Catholic Sisters.

"I think it's because there are fewer people going to church," Sister Kathleen said. "I shouldn't just say Catholics, but just there are a few people of faith."

"I don't know that we should be surprised that we're not popular," Sister Madeline said. "Christianity got popular in our country for a while, and now it's pretty uncool. And that's OK. Jesus wasn't cool, and yet, he changed everything."

The nuns don't think their vocation will be extinct anytime soon.

NEWSY'S CAT SANDOVAL: A life of prayer. Some people would say that's not necessarily a lot of action to make an impact or change in this world. What are your thoughts?

SISTER KATHLEEN O'NEILL: I think for starters, our goals are pretty humble. Most people are not going to make a huge impact in this world. Most of us are not going to, and I would say we see our place as humanity praising god. We were called to give our lives to God.

Whether it is singing God's praise, praying quietly or candy making, the Iowa sisters have devoted their lives to making this world a sweeter place.