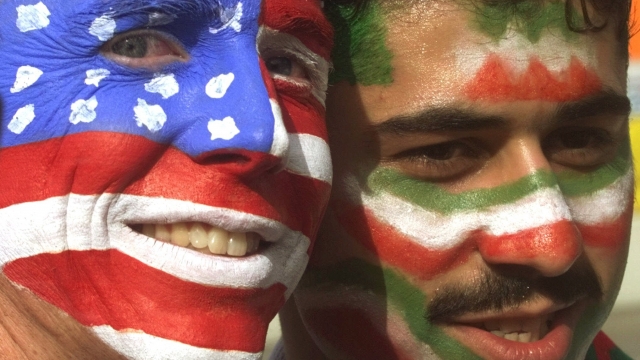 Iran's nationwide protests, its expanding nuclear program and regional and international attacks have pushed Tuesday's match beyond the stadium.

A win means a trip to the next round of 16, and for Iran it would be the first time in the country's World Cup history.

Team U.S.A. insists it's just a soccer match, but if history is any guide, the showdown between the two political enemies could be a highly emotional affair.

The two countries faced off once before at the 1998 World Cup in France. That match, which Iran wan, took place 19 years after the 1979 Islamic revolution overthrew the U.S.-backed Shah.

After two decades of animosity, there was hope that the match would bring the U.S. and Iran closer.

At The World Cup, Iran Protests Are In The Spotlight

The United Nations Human Rights Chief is sounding the alarm about the situation in Iran.

On Tuesday, emotions between the two nations are still running high and moving in opposite directions.

Earlier this week, Iran asked the soccer governing body FIFA to kick America out of the tournament after the U.S. Soccer Federation briefly posted Iran's flag without the symbol of the Islamic Republic.

For more than two months, Iranians have taken to the streets to protest the repressive Islamic regime and its brutal crackdown of the protest movement.

The unrest was sparked by the death of Mahsa Amini while in custody of the country's morality police after she was arrested for allegedly wearing her hijab too loosely. However, Iranian leaders accuse the U.S. of orchestrating the protests.

A World Cup win against the U.S. — which they refer to as "The Great Satan" — could prove handy, but could also backfire.

"We should be quite clear of the type of challenges they will face if the Iranian team wins," said Trita Parsi of the Quincy Institute for Responsible Statecraft. "Theres a decent likelihood that there will be massive crowds going out onto the streets celebrating under those circumstances. Those could turn into protests against the regime, and the regime would have great difficulty handling it."

At the same time, experts say most Iranians don't buy their government's rhetoric.

"There is a gap between the state and society," said Saeid Golkar, Senior Fellow on Iran Policy at The Chicago Council on Global Affairs. "While the regime is anti-American, the [Iranian] society in general is pro-American."