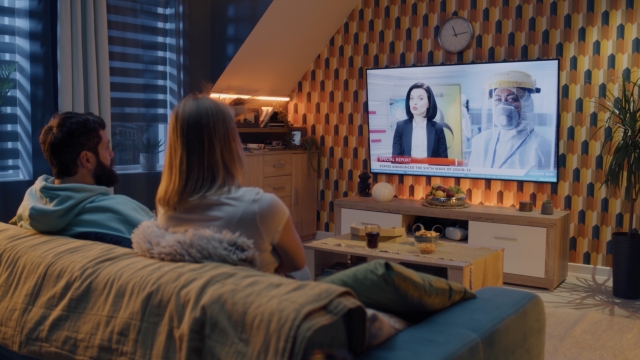 In general, many people choose to avoid the news. A Reuters-Oxford study found more than 40% of Americans sometimes avoid the news, and the main reason is that it's too negative and "brings down" the mood.

Ed Wasserman, a professor at and former dean of the Graduate School of Journalism at UC Berkeley, spoke with Scripps News about the factors behind declining news consumption in America.

"I think that the media have always been accused of being excessively negative," Wasserman said. "News is in part defined around things that depart from significance, things that draw people's attention. Things that people will find shocking or disturbing and feel that they need to know about."

Humans also have what's known as "negative news bias." Research shows that bad news prevails, an humans have a tendency to be more attentive to negative content —giving context to the phrase, "If it bleeds, it leads."

If more people are talking and interacting with bad news, social media algorithms can exacerbate that bias by only bringing negative news to their feeds.

The study also found that the consumption habits of people who have grown up with social media are very different than traditional consumption methods like TV or newspapers.

Research shows Facebook remains the most-used social platform for news, but users also complain they see too much news in their feed compared to other platforms.

Meanwhile on TikTok, 15% of young adults said they used it as a platform for news, with Americans having some of the higher numbers among countries surveyed.

Where people consume their news can also depend on political affiliation.

Regardless of how or where Americans are getting their news, being "worn out" by the amount of it is one of the most cited reasons for news avoidance.

For example, while Russia's invasion into Ukraine initially increased news consumption, there was also an increase in selective avoidance of relevant content as time went on, even in countries directly impacted by the conflict like Poland and Germany.

Then there's also the feeling of there being too much of a certain kind of news, like the constant coverage of politics or COVID-19. The media keeps revisiting these complex topics as developments arise, but the public just doesn't seem as interested.

"I think the problem is the better the media get and understanding the full complexity of the problems that we face, the harder job it is to present those in ways that make sense to readers who are not experts in those fields," Wasserman said.

There's also a portion of audiences that say they actively avoid news because they feel it leads to arguments or feel like they can't do anything about it.

US newspapers continue to die at a rapid rate

Around 7% of America's counties now have no local news outlets, and around 20% are at risk of their communities becoming news deserts.

"To some degree, we need to be mindful of the fact the media are victims of and they're at the mercy of the political scene that they're covering," Wasserman said. "If that scene itself has degenerated into a food fight, then the media have very little option but to cover that food fight."

So, what can journalists do to improve the perception of news?

Nina Alvarez, who is the director of global journalism at Columbia Journalism School, says the media can improve on how it covers and explains some of these polarizing topics.

"I think that we've focused on one aspect of the border crisis, and that is the negative impact that politicians want us to talk about," Alvarez said. "I think that we have allowed that narrative to be the only narrative. Not that there's much positive to that story, but I think that there is something that would help the American viewer understand better what is really behind this massive migration."

That "something" Alvarez mentioned is basically a shift away from reporting just the "he said, she said" of an issue and to go deeper, explore the why and inquire about solutions.

"Not only does it create a common benefit, but it also engenders a certain gratitude toward the media that are presenting them with those stories," Wasserman said.

Being a journalist isn't always easy, but for many of us it's the passion that drives us.

Just 26% of Americans say they trust most news most of the time. This annual event underscores the vital role of news literacy in a democracy and provides audiences of all ages with the knowledge and tools to become more news-literate.