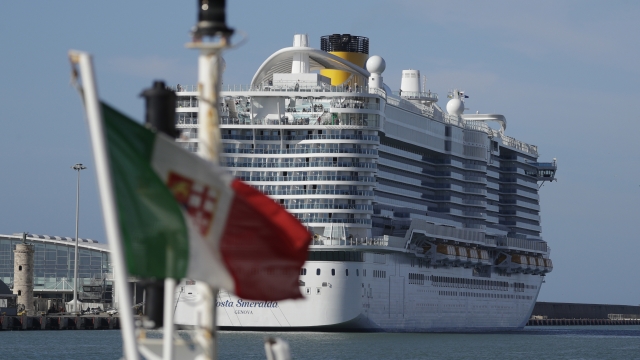 The Costa Crociere cruise line confirmed a 54-year-old woman from Macao came down with flu-like symptoms while aboard the ship.

Thousands of people were held on a cruise ship in Italy after one of its passengers started showing possible symptoms of the coronavirus.

Costa Cruises confirmed that a 54-year-old woman from Macao came down with flu-like symptoms while on board one of its ships.

Both the woman and her travel companion were placed in solitary confinement in the vessel's hospital section Wednesday, and the situation was reported to Italian maritime authorities.

The ship was placed on lockdown while the couple was tested for the deadly virus, barring 6,000 passengers and 1,000 crew members from disembarking. But The Associated Press reports, more than 1,000 people were allowed off the vessel later Thursday to walk through Rome.

Other countries in Europe, including France and Germany, are working to contain the virus. Russia closed its lengthy border with China Thursday, while more European airlines suspended flights to the country.

As Newsy previously reported, the illness has killed at least 170 people and infected more than 7,900 others. The majority of those cases are in China, but patients have also been confirmed in more than a dozen other countries, including France, Canada, South Korea and the U.S.