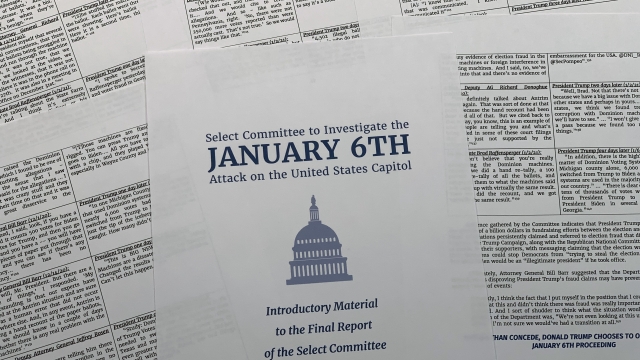 The Jan. 6 House committee placed blame on Trump for the insurrection and reiterated key evidence it has acquired in its investigation.

At the final public meeting of the Jan. 6 select committee, the nine committee members laid out the evidence compiled during the nearly 18-month investigation, highlighting former President Donald Trump's alleged inaction during the violent attack.

"For hours, he would not issue a public statement instructing his supporters to disperse and leave the Capitol," said Republican Rep. Liz Cheney.

The investigation squarely placed blame on Trump and his repeated claims of a stolen election.

After reiterating key evidence presented in previous hearings, the committee unveiled four criminal referrals for the former president to the Department of Justice.

"Ours is not a system of justice where foot soldiers go to jail and the masterminds and ringleaders get a free pass," Democratic Rep. Jamie Raskin said.

- Obstruction of an official proceeding

- Conspiracy to defraud the United States

- Conspiracy to make a false statement

- The charge of incite, assist or aid and comfort an insurrection

"It is a grave federal offense, anchored in the Constitution itself, which repeatedly opposes insurrections and domestic violence and indeed uses participation in insurrection by office holders as automatic grounds for disqualification from ever holding public office again at the federal or state level," Rep. Raskin said.

The panel is also recommending criminal charges against Trump lawyer John Eastman and other Trump associates.

Beyond the criminal referrals, the nine members also approved making referrals to the House Ethics Committee for a few of their colleagues.

The panel is taking action against House Minority Leader Kevin McCarthy and Reps. Jim Jordan, Scott Perry and Andy Biggs for their refusal to comply with the panel's subpoenas.

"We understand the gravity of each and every referral you're making today, just as we understand the magnitude of the crime against democracy that we describe in our report," Rep. Raskin said.

The committee released over 150 pages of introductory material Monday, with the full report expected later this week. Thompson also said they will release the majority of their non-sensitive evidence before the end of the year.