John McCain Gets His Maverick Groove Back 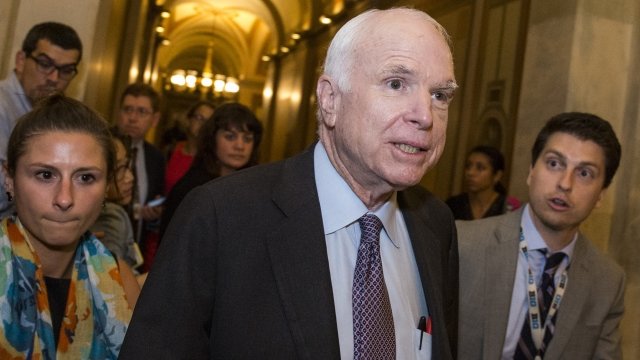 It was high drama in the middle of the night. With two "no" votes already on the record from Sens. Lisa Murkowski and Susan Collins. Arizona Sen. John McCain walked in and with the flick of his wrist, killed his party's attempt to repeal Obamacare.

It was all the drama you couldn't even write into "House of Cards." OK, maybe not that crazy, but it capped off an abnormally dramatic process over a couple of weeks in Congress that we haven't really seen, at least in a while.

It started with McCain announcing on July 19 that he has brain cancer and was looking into treatment options. But as it became clear that Senate Majority Leader Mitch McConnell was going to move forward with some type of Obamacare vote, McCain took over the headlines again, saying he was making a return to the Senate to vote to start debate on a repeal and replace deal.

Before voting even began on Thursday night, McCain was signaling he wasn't really a fan of the repeal plan. And he definitely didn't like how there had been no bipartisanship at all. See, McCain has always held that the original sin of Obamacare was not enough consensus and not one Republican vote.

"When we passed Obamacare in 2009, it split us. It split us dramatically," McCain said.

But it still wasn't clear how McCain would end up voting Thursday night. Would he have traveled all the way back with brain cancer just to kill the bill? Apparently, yes. And that's despite Vice President Mike Pence spending about 20 minutes trying to get him to say "yes" and a phone call from President Trump — nothing worked. But that surprising move is a reminder that McCain has basically been doing whatever he wants for decades in Congress.

Younger generations might largely remember McCain from his presidential campaign in 2008 — when he took on then-Sen. Barack Obama, chose Sarah Palin as his running mate, and ultimately lost. But McCain's been building his reputation as a "maverick" for much longer than that; it's one of the reasons he became the GOP's nominee nine years ago.

He's defied his party for years, teaming up with Democrats to release a report on torture during the George W. Bush years and working with Bernie Sanders on health care for the country's vets. And by most accounts, he's a real public servant in D.C. to find compromise and actually govern.

McCain's legacy won't be graded until years from now. But one thing is for sure: His huge role in tanking the GOP's Obamacare repeal is likely going to be a big part of it.